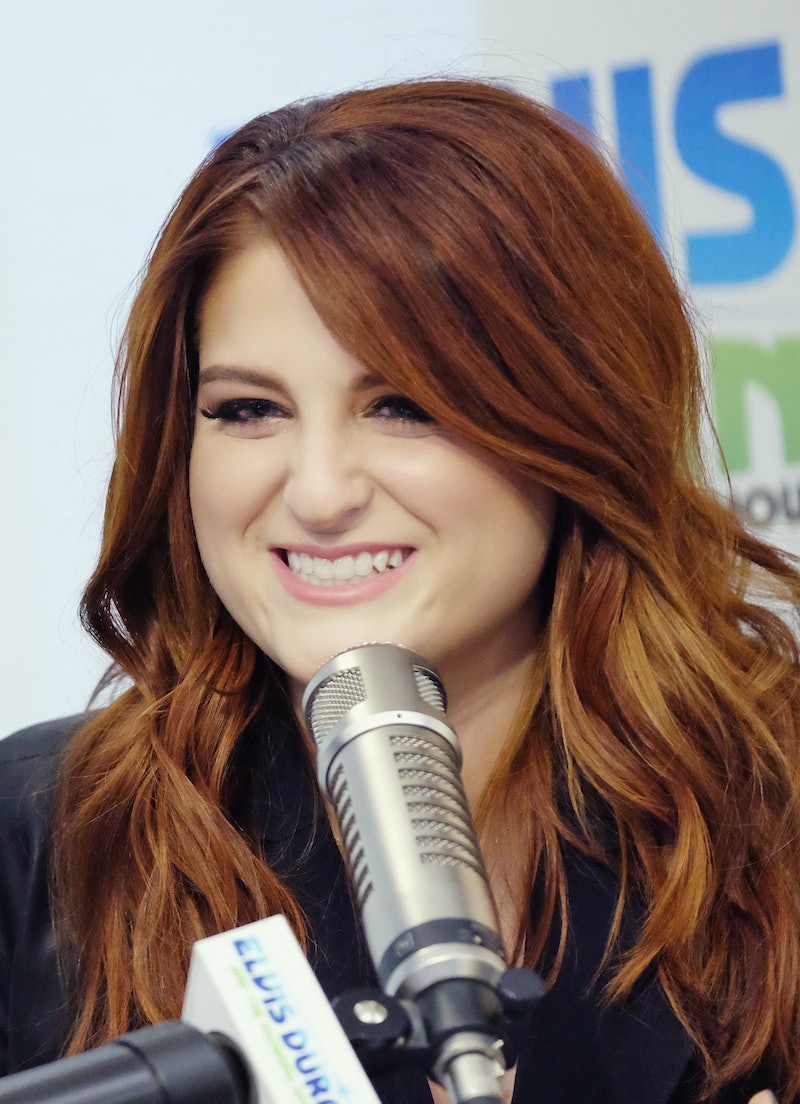 It's been less than a week since the premiere of Meghan Trainor's new single, "NO," but she's already planning her next move: On Wednesday, the 22-year-old pop superstar previewed a new track on Snapchat. Although she hasn't revealed the name of the song yet, she did let slip that it'll be released as the second single from her forthcoming sophomore album, Thank You (due out May 13). In the brief video clip, one of Trainor's friends is seen dancing enthusiastically to the up-tempo tune, which sounds like it shares "NO's" early '00s throwback style. (Specifically, it reminds me of something "Happy" hit-maker Pharrell Williams might've produced circa 2003.) If "NO" hadn't already convinced you that Thank You is going to be huge for Trainor, this new snippet should definitely do the trick.

The executive producer of Thank You, Ricky Reed, opened up about the LP's sonic influences during a recent interview with Popdust. Apparently, Trainor's new material was inspired by a variety of genres, including country, gospel, funk, and Caribbean soca music. "As soon as we stumbled onto 'NO,' we couldn't turn back," Reed said. "We started moving into uncharted territory and trying things we would never have tried otherwise. The result is an album that is eclectic but with a focus. It is so musical and so inspiring. This album is a masterpiece."

A "masterpiece," huh? Reed certainly knows how to build hype! Check out the preview of Trainor's possible second single below.

Believe it or not, that's not the only new Thank You song Trainor teased this week: On Sunday, the "All About That Bass" singer gave fans a taste of a track called "Woman Up" during a segment for CBS Sunday Morning. (Navigate to the 0:59 mark in the YouTube video below to hear it.)

Not much is known about "Woman Up" at this time, but Trainor did briefly mention it during a recent interview with TIME. When asked if the characterization of some of her past songs (like "Dear Future Husband," for instance) as "anti-feminist" or sexist affected the way she approached her new project, she replied: "I didn't really think about my last record while going into this record, but I did know that I had a few good women anthems, and I have even more now too. I have a song called 'Woman Up.' Like man up, but woman up. I love women anthems, and I know the world likes hearing them..."

So, it seems as though Trainor will continue explore themes of female empowerment on Thank You. However, that may be one of the only things the upcoming collection has in common with her debut, Title: Much like "NO" and the album's possible second single, "Woman Up" has an early '00s vibe to its production. I guess we should call Trainor's new musical era, "The Reinvention of M-Train"! Hopefully, her decision to step away from her tried-and-true doo-wop sound and challenge herself as an artist will pay off big time.

Thank You is available for pre-order on iTunes now.