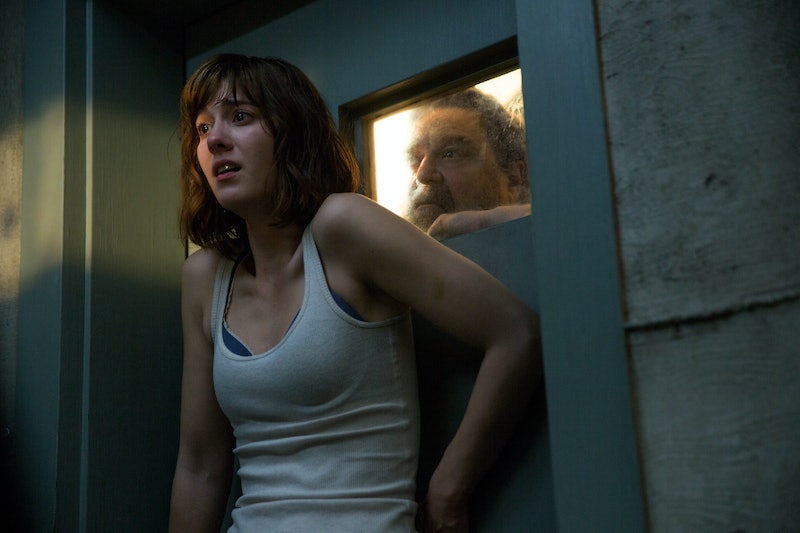 By now, you might have heard that 10 Cloverfield Lane isn't found footage like its predecessor and features a monster of more human proportions. But how do the two Cloverfield movies connect? Producer J.J. Abrams told EW that this new film is a "spiritual sequel" to 2008's Cloverfield , but that 10 Cloverfield Lane adds a different layer to the story and uses traditional cinematography to move through its chilling and mysterious plot, rather than found footage. Recently released photos seem to show John Goodman as the monster in question and put a heroine played by Mary Elizabeth Winstead at the heart of the film, making the new film even more mysterious.

The internet is full of speculation about how the two movies will differ from each other, but many are wondering how they are similar, and have dissected the information available online. Though the new movie's trailer suggests that most of it takes place in a bunker and revolves around three characters, 10 Cloverfield Lane takes place in the same universe as Cloverfield and shares more than just a title with the original blockbuster. If you're doing some last-minute studying up before the second film explodes in theaters this weekend, you're not alone in wondering how the movies cross paths.

Abrams has continued to assert that 10 Cloverfield Lane is not Cloverfield 2. "It's a wholly original story with different characters, different monsters, different everything," he says in a recent interview with Rolling Stone, "But — and this is such a strange thing to say — every time we would talk about that script it would feel like the same color as Cloverfield. It was this vibe I had." Apparently, it's John Goodman's character that most clearly unites the two films, due to the fictional Tagurato company, which had a hand in spurring the ginormous city-stomper in the first Cloverfield. As the fake website for the company says, Goodman's character, Howard Stambler, received an employee of the month award in February 2016; it seems that his character knows something that viewers don't, and feels compelled to stuff himself away in a bunker.

Does Stambler feel responsible for the monster of the first film? Does this guilt turn him into a monster? Audiences will have to form their own conclusions when 10 Cloverfield Lane hits theaters this weekend.