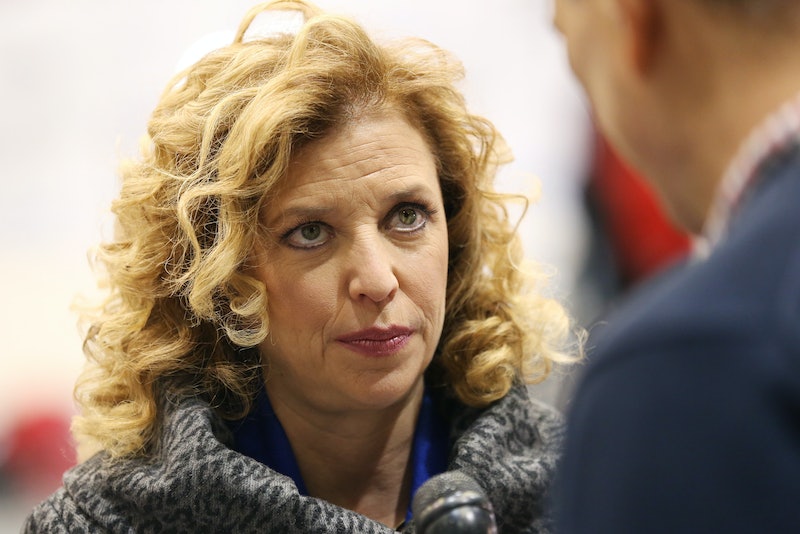 The chair of the Democratic National Committee, Florida Rep. Debbie Wasserman Schultz, just can't catch a break. In the middle of a contentious election season, the beleaguered congresswoman finds her name in the headlines yet again, and the reason isn't all that flattering. Wasserman Schultz is in trouble for an ill-advised bipartisanship attempt that may have helped her campaign, but could have consequences for millions of working class Americans, as far as some progressives are concerned. Bustle has reached out to Wasserman Schultz for comment.

An anti-Wasserman Schultz advertisement commissioned by the group Allied Progress begins, "President Obama was right when he condemned predatory payday lenders for trapping hardworking Americans in a vicious cycle of debt." It goes on to allege that Wasserman Schultz has received $68,000 from the payday loan industry from 2006 to 2014, citing the Center for Responsive Politics and FEC filings as evidence. And according to the political research nonprofit OpenSecrets, Wasserman Schultz may still be receiving campaign contributions from the industry.

OpenSecrets reported that Wasserman Schultz received a $10,200 contribution of from Amscot Financial during this current fundraising cycle. Amscot was one of the financial services firms that was mentioned in the ad, its logo appearing briefly next to the congresswoman.

Wasserman Schultz is co-sponsoring H. R. 4018, a bill that would "amend the Truth in Lending Act to establish deferred presentment transaction requirements, and for other purposes," according to its summary. According to The Huffington Post, Wasserman Schultz's spokesperson Sean Bartlett said in a statement: "The Congresswoman wants to work with the CFPB [Consumer Financial Protection Bureau] on the way forward, and believes the Florida law is an example of how to achieve their shared goals of balancing strong consumer protections with preserving access to credit in underserved communities." But experts — like Joe Valenti of the Center for American Progress and Alice Vickers of the Florida Alliance for Consumer Protection — aren't in agreement that payday loans help consumers, as some people can get stuck in a cycle of debt.

None of this is particularly good news for the congresswoman. Ads like the one against Wasserman Schultz are not only designed to get voters to switch their allegiance, but they're also important in the fundraising game. According to data from OpenSecrets, Wasserman Schultz has seen a precipitous drop in fundraising since 2012, when she brought in over $3.6 million during that election cycle. In 2014 she only raised roughly $2.7 million. This year, she cracked the $1 million threshold, with less than nine months left to go until the general election in November. The claims made in the ad are designed to negatively impact Wasserman Schultz's fundraising potential with other Democratic groups, further isolating the head of the DNC from her base of support.

Allied Progress, which commissioned the ad, is helmed by long-time political operative Karl Frisch. Frisch worked in Republican politics, including for Arizona Sen. John McCain briefly, before coming out as a progressive. A fellow at Media Matters for America, a media watchdog group and think-tank, Frisch also played an instrumental role in reportedly uncovering rampant corruption by House Republicans on the Rules Committee during his time as press secretary for Democratic Rep. Louise Slaughter in 2005.

Even if it's a profitable business interest operating in her state, Wasserman Schultz should seriously reconsider her alleged alliance with the payday loan industry — Amscot Financial and its CEO Ian MacKechnie aren't even located in Wasserman Schultz's district, according to data published on LinkedIn. As a public, elected official and head of the national Democratic Party, Wasserman Schultz should be interested in serving the best interests of all Democrats, and all Americans. From the data that has been made available so far, it seems like payday lending is only in the best interests of the owners of payday lending operations. She needs to follow the lead from Sen. Elizabeth Warren, as well as President Obama, and stake a strong stand against exploitative financial interests.