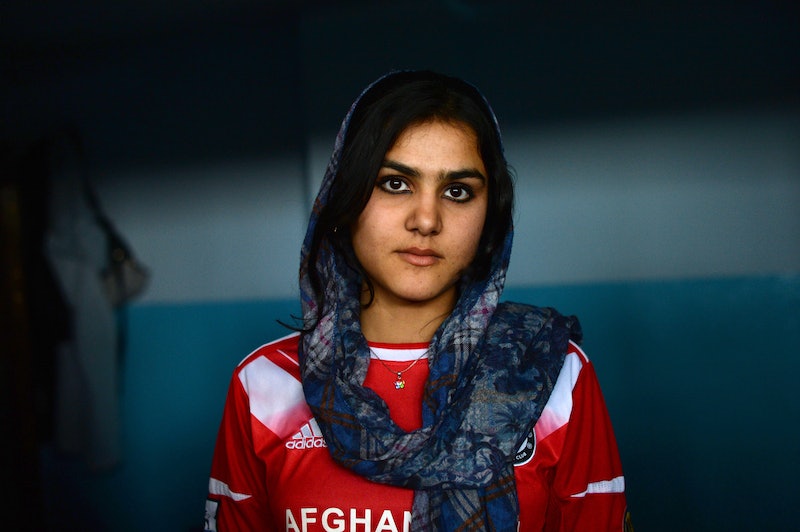 Women around the world face a wide variety of barriers when it comes to full and equal participation in sports, and for Muslim women who wish to — or are required to — cover their hair, uniforms can be one of those challenges. Which is why the new official uniforms for the Afghanistan women's soccer team are so awesome. The new jerseys include a head covering similar to a traditional hijab that stays in place and won't interfere with play. The players seem to be excited — and rightly so. This is a big deal.

The new jerseys were designed by the Danish sportswear company Hummel, and they conform to the FIFA rules regarding head coverings for female athletes. Although FIFA banned head coverings during matches up until two years ago, today women are allowed to wear head coverings such as hijabs so long as they are the same color as the team jerseys and are not attached to the shirts themselves. The new Afghanistan soccer uniforms meet these requirements. The head coverings, which appear to be somewhat like the hood of a sweatshirt, are part of a layer that goes on underneath the jersey, both meeting FIFA requirements and ensuring that the covering will stay in place during the intense activity of a soccer match.

"We don't sponsor the biggest teams in the world, but we make partnerships with teams and clubs with a story to tell, like Afghanistan," Hummel owner Christian Stadil said on the company's website. "We try to meet the Afghan people where they are, and right now that is by helping the women play football with or without a hijab."

Former team captain Khalinda Popal, who was forced to retire last year due to knee injury but remains one of the most recognizable women in the Afghan soccer world, is also happy about the new uniforms. “The national team shirt symbolises all of our culture, our tradition, our history,” Popal said on Hummel's website.

“I have been involved in the consultation for the design of the shirt pretty much from the outset,” she continued. “I wanted something that reflected the strength of the Afghan character and incorporated the very best of the country’s traditions and heritage. I think this shirt has achieved both.”

The Afghan women's national team was first formed, to great controversy, in 2007 and began competing internationally in 2010. The team sparked such intense backlash that Popal, one of the founding members and an outspoken advocate for women's rights, was forced to flee the country in 2011 due to death threats. Despite the vitriol, however, the team has continued to play — much like Muslim women around the world who excel at sports despite the odds. And the new uniforms will hopefully make it that much easier for these amazing women to compete.

"It was very challenging for our teammates because our country is Islamic and the government and the people really want the women's national team to wear a hijab," Popal explained to People magazine. "But our team was traveling to South Asian countries and it was very hot there and very difficult to play with big scarves around our necks and heads."

In her remarks on Hummel's website, Popal also added, "I think the Afghanistan women's team shows the huge potential football has as a unifying force. I like to think that we have given a lot of women in our country fresh hope."

Three cheers to that.

More like this
Sandra Bullock, Girlboss Extraordinaire
By Matt Harkins & Viviana Olen
11 Trends From The ‘90s That Made You Feel So Cool
By Julie Sprankles
Meghan Markle’s Favourite Skincare Brand Has Finally Landed In The UK
By Tomi Otekunrin
How To Master Baby Braids, According To TikTok
By Tomi Otekunrin
Get Even More From Bustle — Sign Up For The Newsletter