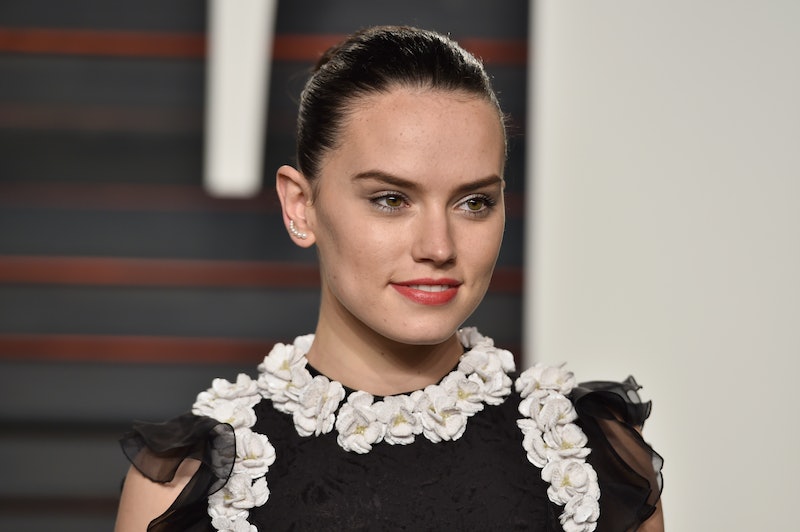 Take note, anyone who feels the inexplicable need to body shame anyone ever: Daisy Ridley is not here for your BS. But she's also not here to attack others for their opinions, no matter how offensive or wrong they may be. Instead, Daisy Ridley is all about educating others about tolerance, acceptance, and reinforcing everything that her Star Wars character, Rey, stands for.

According to the BCC, the Star Wars: The Force Awakens actor re-posted a meme that featured her in character as Rey — only with a superimposed speech bubble that read, "I can't believe the realistic expectations I'm setting for young girls. Who cast me anyway? Don't they know that real women have curves?"

"'Real women' are all shapes and sizes, all ethnicities, all levels of brave, have families, don't have families," Ridley captioned the Instagram, according to the BBC. "I am a 'real woman' like any woman in this world."

After supporters began attacking the meme generator for their choice of words, Ridley deleted the 'gram and posted another one in its place.

"Guys it was not my intention for anyone to send messages to that poor person that posted the original picture," she wrote of her further thoughts on the topic. "My whole post is about being kind to each other, so please refrain!"

While Ridley was not about to be body shamed — let alone allow someone to claim that she is somehow a negative influence on young girls because of her natural body type — her response was instead rooted in a teachable moment, an opportunity to educate others that the whole "real women have curves" school of thought is bullsh*t and not one characteristic makes one woman any more "real" than another. And as she explained in her second Instagram post, she did not set out to shame the original poster, but instead preach tolerance and acceptance of everyone.

"It is much more hurtful to slate other women than to BE a woman, BE a character, BE whoever you want to be," she wrote. "I'm a normal girl thrust into extraordinary circumstances, just like Rey. I will not apologise for how I look, what I say and how I live my life cause what's happening inside is much more important anyway and I am striving to be the best version of myself, even if I stumble along the way."

She also defended her badass Star Wars character by explaining what the majority of fans say to her on a daily basis, revealing that she is constantly contacted by "people who relate to something in Rey they haven't found in a female character before. People whose daughters now think they can do things without the aid of a man, but who wouldn't be ashamed to ask for help."

It's important to note that Ridley is not saying this in a boastful way, but instead presenting it as evidence that 1) most people in the world are kind and have positive, empowering things to say, and 2) the depths of her character go so beyond Rey's physical appearance that it is absolutely asinine to have people comment on it or that she has to defend herself from body-shaming haters.

Instead of focusing on Rey's physical appearance, how about we instead discuss the important positives of Rey being an empowering role model for young girls based on her badass independence, strong sense of self, and the fact that she is now the focus of one of the most iconic film franchises of all time? And when we're done praising Rey for all of that, let's note that all above the above describes Daisy Ridley to a T, as well. Two positive role models for young girls — and young people, and hell, even just people in general? I'll take it.