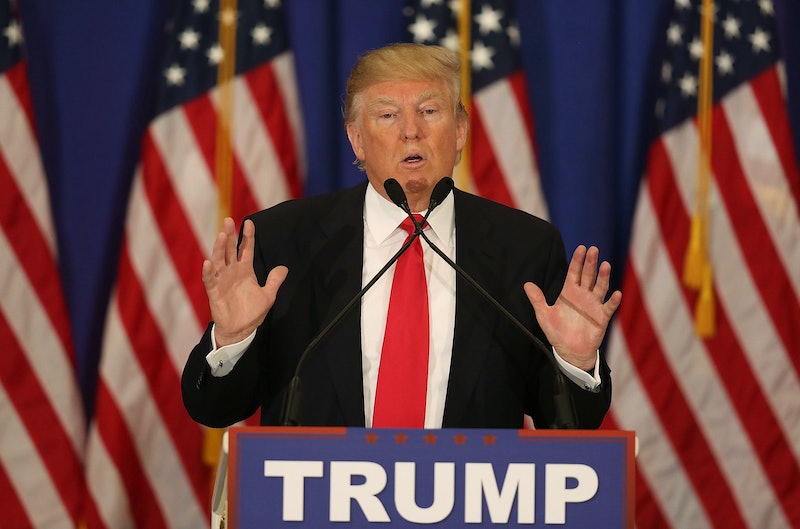 The opponents of Republican presidential hopeful Donald Trump have, in recent weeks, quite ferociously been digging up the billionaire's past business ventures in efforts to discredit the front-runner. Trump, however, has taken the criticisms in stride, enthusiastically showing off some of the branded products to come out of those businesses at his press conference on Super Tuesday 2. The Donald even requested in the middle of the presser that someone hand him a copy of Trump magazine, a blast from the past that Trump still touted as a successful endeavor. So whatever happened to Trump magazine? Because what the GOP candidate held up at the news conference was definitely not a real issue of the publication.

The timeline on the luxury lifestyle magazine's existence is a bit hazy. The quarterly magazine began printing issues in 2007, according to NBC News. A New York Daily News feature story on the failed media venture, however, states Trump was being printed as far back as 1998. The difference in dates is likely due to the fact that a few different variations of Trump publications, including Trump Style and Trump World, were being printed before Trump got going.

What's crystal clear is when the business officially folded — in 2009. At the time that Trump saw its last issues hit the shelves, it was being sold for $5.95 and had a circulation of no higher than 100,000 copies, according to the Daily News.

Trump also appeared somewhat confused at his press conference on the details of his publication's production, particularly about what he is allowed to refer to as a Trump brand magazine. What a Trump campaign staff member handed to him at the podium, and what Trump said he had been reading just days earlier, was actually a publication called The Jewel of Palm Beach. The magazine comes out once each year and is the exclusive publication of Trump's Mar-a-Lago Club, but it is published by Palm Beach Media Group, an organization over which Trump has no ownership.

The Republican front-runner should have known better, though. If the title of the magazine he was holding before the media at the Florida conference didn't have "Trump" in the title, did he really think it could have been his?