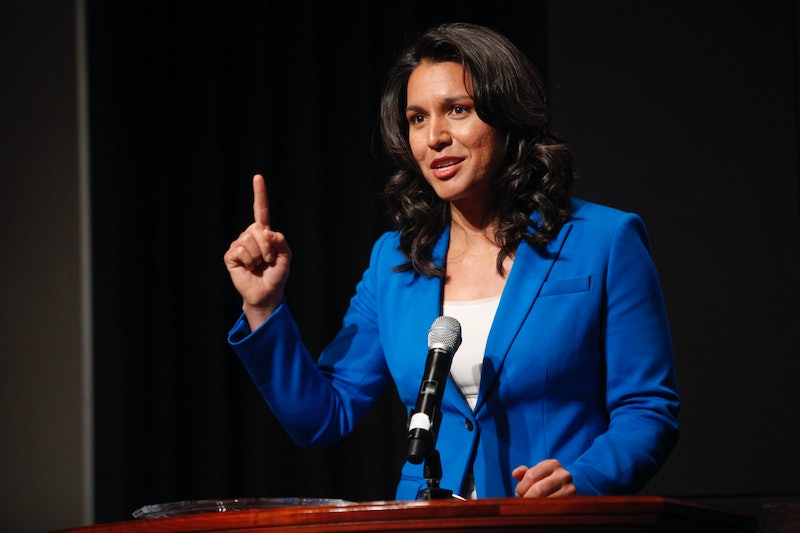 As Tuesday night in Michigan once again proved, Democrats are feeling the Bern in numbers much higher than most could have conceived of when the Vermont Sanders announced his candidacy on April 30, 2015. Still, although Bernie Sanders is holding his own against Hillary Clinton, strikingly few elected federal officials have endorsed him. While Clinton has racked up more governors, senators, and representatives than she knows what to do with, only a handful of representatives have backed Sanders. One of Sanders few supporters in Congress is Tulsi Gabbard — and she's risking her own political future to try to get him in the White House.

That last part may sound hyperbolic, but Gabbard resigned from her position as Democratic National Committee vice chair in order to publicly endorse Sanders. Last month, the Hawaii Congresswoman went on NBC's Meet The Press to announce to the nation that she would step down to throw her support behind Sanders because she believed he, rather than Clinton, would make sure, "[W]e don't continue to find ourselves in these failures that have resulted in chaos in the Middle East and so much loss of life."

Breaking ranks so publicly with the party is a gutsy move for any politician, but especially so for a newbie like Gabbard. The 34-year-old has only been serving in Congress since 2013. Moreover, she is both the first American Samoan and the first Hindu member of Congress.

And Gabbard is one of four women in Congress who has served in the military. Since coming out in support for Sanders, Gabbard has regularly cited her wartime experience — she was deployed to Iraq and Kuwait — as her reason for endorsing the Vermont senator and knowingly risking the political consequences. On Wednesday, she spoke to CBS News' Demarco Morgan, explaining:

I just got to a point where as a soldier, as a war veteran, I was so frustrated that ... the question of war and peace and what qualities we're looking for in our next commander-in-chief were simply not being addressed. I felt that I could no longer stand on the sidelines, and I needed to get in and to speak out not only for myself ... but for all of my brothers and sisters.

Gabbard specified that she felt compelled to actively campaign for the "candidate, I feel, would take us down a path towards peace as opposed to Hillary Clinton, who has shown through her record and her current positions that she will continue to take us down this road of interventionist regime change wars." Those sound like fighting words from Gabbard, especially since Clinton has highlighted her foreign policy experience as a cornerstone of her presidential campaign.

It's little wonder that Morgan then asked Gabbard, since "the Clintons have had a well-oiled machine in Washington for years, do you fear any retribution from the Clintons?" While the Clinton campaign would likely bristle — at the very least — at the term "well-oiled machine," one wonders if some elected officials have been afraid to endorse Sanders out of fear of challenging the Clintons and their powerful political friends. According to FiveThirtyEight, just five U.S. representatives have endorsed Sanders this whole election. Meanwhile, seven have endorsed Clinton since Feb. 24, along with Senate Minority Leader, Harry Reid. Of course, that disparity can just as easily be read as an indication of how little faith fellow politicians have in Sanders.

However, Gabbard claimed she had been discouraged from going against Clinton. She told Morgan, "I was heavily warned by people who care about me not to endorse Sen. Sanders because of that fear of retaliation. Look, that fear exists in a lot of folks that I've heard from." But, she added, "There is far too much at stake here to stand on the sidelines and let politics get in the way of what's real."

During the interview, not only did Gabbard decline to publicly state that she'd support Clinton if she won the Democratic nomination, but she argued that Sanders still had a strong shot at the presidency. When Morgan pressed Gabbard on Sanders' electability, she simply — and quite confidently — said, "It's not over until it's over. I have faith in our democracy."