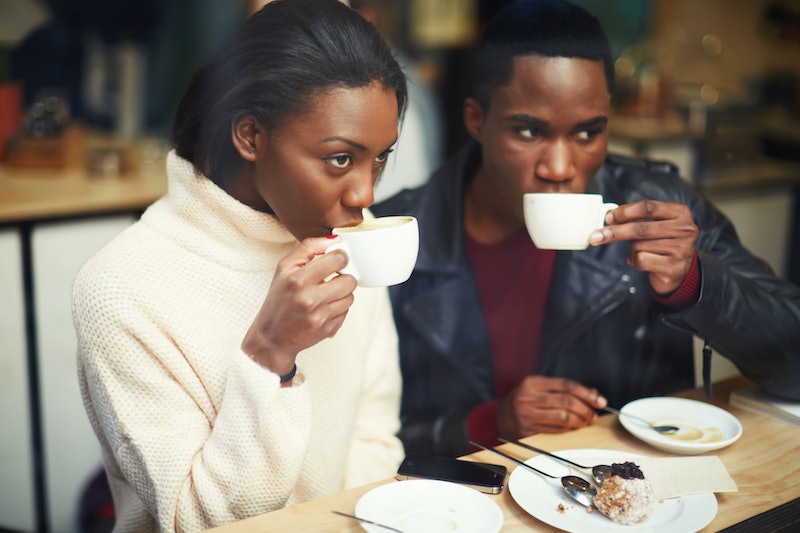 Unsurprisingly, some newly released OkCupid data finds that men are overwhelmingly not OK when it comes to figuring out who pays for the first date, while women D(really)GAF. A whopping 62 of men say they whip out their wallets to pay the whole bill at the end of a date, while 43 percent of women say they, too, whip out their wallets to split the bill. However, while 17 percent of women are comfortable sitting back and having their date pay, and 36 percent of women say it doesn't really matter who pays, only 20 percent of men believe it doesn't matter, and such a negligible amount of them are comfortable with women paying that OkCupid didn't even release the percentage. Only a negligible number of women are comfortable paying the whole bill, too, while 17 percent of men opt to split the bill.

Two feminist arguments have popped up recently, turning the tables on "equality" and actually arguing in defense of straight women allowing (or demanding for) men to pay the bill. One of them is that, while yes, women are now independent, financially stable members of the workforce with the means to pay their own way, the workforce simply doesn't compensate them equally. For as long as there's a gender-based wage gap, perhaps dudes could make up for it by footing an extra 22 percent of the bill.

The second argument is that, since it flat-out costs more to be a woman, and thus, to get ready for a date, that, even if a couple is splitting the bill, the woman is still spending more overall for the date. Whether a woman is spending a fortune on a pre-date full body wax because it's her preference or because she's feeding into mainstream beauty standards, you can bet that a straight guy probably didn't even apply a sensible SPF-based moisturizer before leaving the house. And even if a woman consciously doesn't buy into the extremes of feminizing beauty routines, she's still paying more for regular hygiene products than men are, just because she's a woman and thus subject to "the lady tax."

So it's a lot more complicated and nuanced than simply saying "feminism is about equality, so split the tab," when we take into account the systemic financial and economic deficit women are starting out with. But overall, women seem pretty fine with a variety of financial responsibility-sharing options, while men are the ones who overwhelmingly feel the need to pay for the first date.