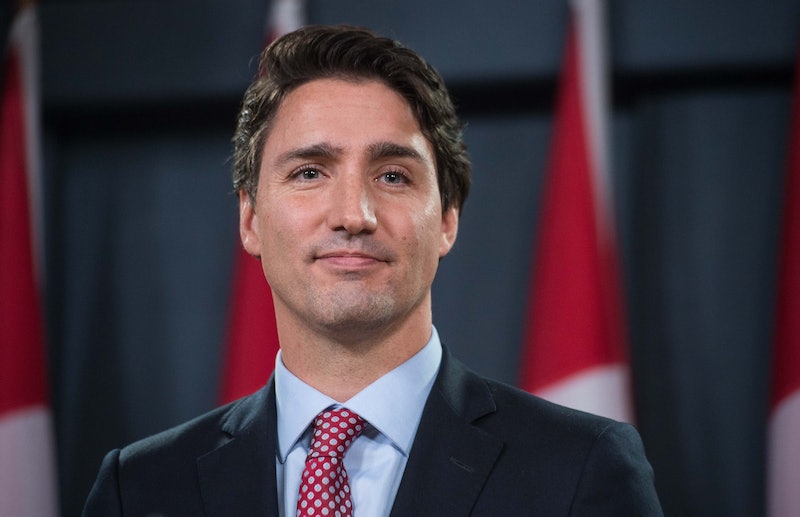 Canada's Reigning Hottie (aka Prime Minister Justin Trudeau) met with President Obama on Thursday, marking the first time a Canadian leader has officially visited the White House in nearly 20 years. President Obama was in good company, too — the prime minister is known for his liberal, feminist stance on national and foreign affairs. Trudeau has likewise helped to rebuild U.S.-Canada relations after his conservative predecessor's contentious tenure. But is the Internet focused on that? Eh, not really. Maybe the Internet will be after it gets passed how ridiculously good-looking Trudeau is, but for now, here are some Justin Trudeau memes that will make you wonder why we can't have nice things too.

Trudeau is no stranger to this type of attention, either. Before being elected into the country's highest office, the prime minister once used his good looks for a charity event in which he stripped off his suit to reveal a tank and briefs, all in the name of liver disease research. The partial striptease raised $1,500 U.S. dollars, with the highest bidder winning a lunch with Trudeau at Ottawa's Parliamentary restaurant.

So hopefully he won't mind too much if some of his fans at home and abroad take to notice some of his finer assets. The Internet certainly has:

From imagining Trudeau as Han Solo to making America great again (despite being the leader of Canada, go figures), it looks like the Prime Minister will keep doing a great job and doing it in style.