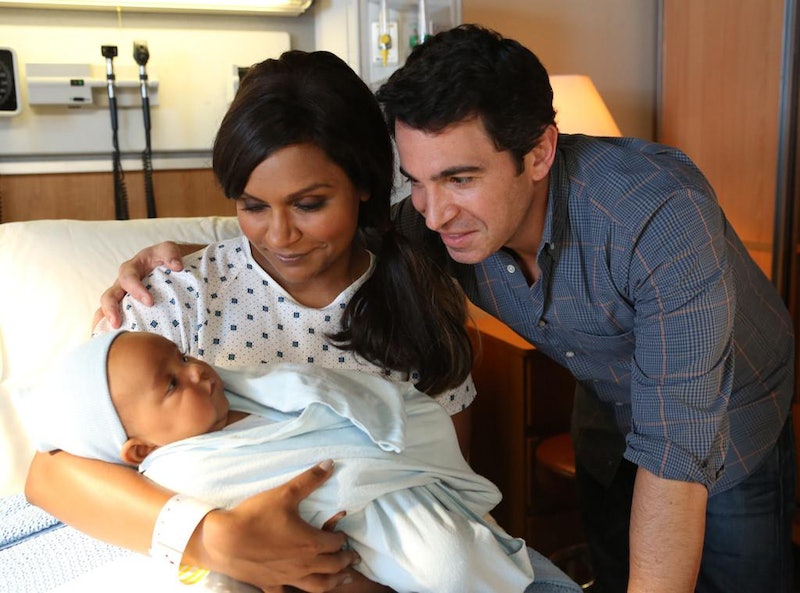 I adore The Mindy Project, and while it's mostly because I consider Mindy Lahiri to be my television soul sister, it's also because I am the biggest shipper of Mindy and Danny ever. Sure, lots of shows have "will-they-won't-they" romances, but there's something about the combination of selfie-and-celeb obsessed Mindy and grumpy, "Piano Man" playing Danny that warms my heart. On paper, they are barely fit to be friends — but in practice, their chemistry is off the charts. Naturally, I was thrilled when the show revealed that Mindy and Danny were going to become parents, and when Danny put his fears aside to ask Mindy to marry him. Sadly, though, the happiness didn't last long: the Season 4 finale showed Mindy and Danny on the verge of a breakup, and it damn near broke my own heart. However, Glamour's new interview with show creator and star Mindy Kaling hints that maybe, just maybe, Mindy and Danny will find a way back to one another.

Kaling sat down with Glamour to discuss the thing on every Mindy Project's fan's mind: what the heck is going on with Mindy and Danny? In the Season 4 finale, it seemed that they were heading for a very sad split, with Mindy moving back into her old apartment and taking Leo with her. (That scene where Mindy cries as she measures her walk-in closet to see if it had room for Leo's crib? I sobbed right alongside her.) The best news Kaling could deliver, though, is what she did end up saying:

I can say that the show will always be about Mindy and Danny. I think that's how it started, and when Chris and I talk about the show, it’s really through the lens of the two of them meeting each other. When I think of Sex and the City, you always remember Berger and Aidan, but the show is about Mr. Big and Carrie. It's also about a woman figuring out what she wants in her 30s, so when I think of this show, I think of Danny as Mr. Big.

Personally, I was never a huge fan of Mr. Big — the dude led Carrie on and cheated on his wife! — but I'm hoping that the connection here is that, like Carrie and Mr. Big, Mindy and Danny will eventually sort out their personal issues so that they can be the partner that the other one deserves. Sure, if that is the case, it could take a really long time for Mindy and Danny to do that — Sex And The City fans know that Carrie and Mr. Big's relationship was one hurdle after another, and half the time, they were in totally different places with what they wanted out of a relationship — but it could still happen in the future.

The Mr. Big symbolism does give us just a gleam of hope that Mindy and Danny could reunite. I love the Mindy Project's oddball romance, and while the show is first and foremost about Mindy, this Dandy shipper is holding out hope that Kaling ultimately wants Mindy and Danny back together just as badly as I do.