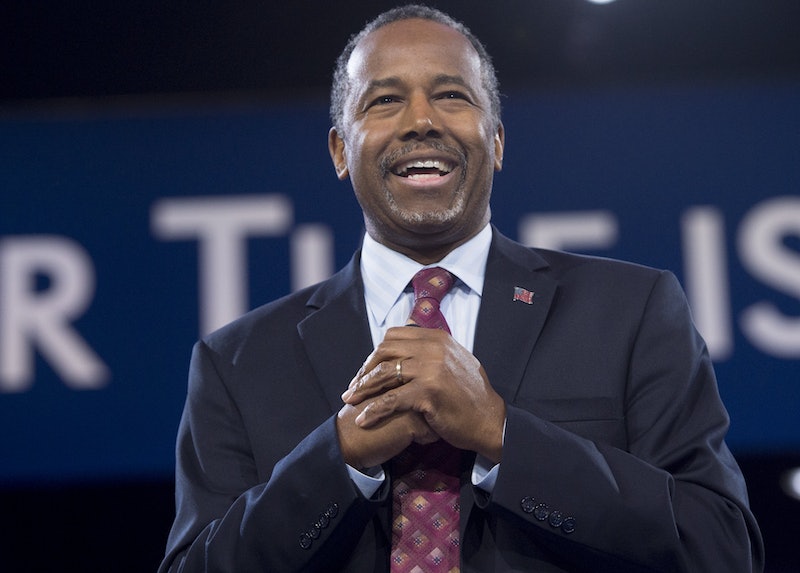 In a surprising turn of events, former Republican presidential candidate Ben Carson plans to endorse former foe Donald Trump on Friday, The Washington Post reported Thursday. The retired neurosurgeon reportedly met with Trump at Mar-a-Lago (one of Trump's luxury clubs) in Palm Beach, Florida, Thursday, when his planned endorsement was decided. The two Republicans will hold a press conference at the same club Friday morning to formally announce Carson's newfound support for the GOP front-runner, according to The Washington Post.

Despite months of public disagreements with Trump, Carson said he was leaning toward endorsing the outspoken candidate over Ted Cruz on Fox News Radio Thursday, explaining that there are two very different sides to him. "There are two Donald Trumps," Carson told Fox News Radio's John Gibson. "There's the Donald Trump that you see on television and who gets out in front of big audiences, and there's the Donald Trump behind the scenes. They're not the same person."

Carson said that the Trump America too often sees in public settings is an entertainer, opposed to the behind-the-scenes Trump who is a "thinking individual." He told Gibson Thursday: "That [second] one is someone you can reason with very easily and who is actually very comfortable talking about issues and recognizing that he doesn't have all the answers. It's a very different one — it's a night and day difference."

In his interview with Fox News Radio, Carson wouldn't definitively say that he would endorse Trump, just that he's "certainly leaning" that way. However, people close to the former GOP candidate confirmed to The Washington Post that the official endorsement will take place Friday morning.

Carson will be the second former opponent to back Trump, after New Jersey Gov. Chris Christie pledged his support to make America great again in a Feb. 26 press conference. Carson's endorsement could turn his loyal Evangelical fans onto Trump's campaign, a demographic the billionaire needs to snatch from Cruz in order to win the party's nomination. Both Carson and Trump were always political outsiders in the election, neither having ever held public office, which really appealed to Republicans fed up with Washington.

Nevertheless, Carson's endorsement of Trump comes as a bit of a surprise after Trump ramped up his criticism of the retired neurosurgeon before he bowed out of the race. Apparently Carson wasn't too offended, and now wants to help Trump get elected — at least the "thinking individual" Trump he met with in the Florida club.