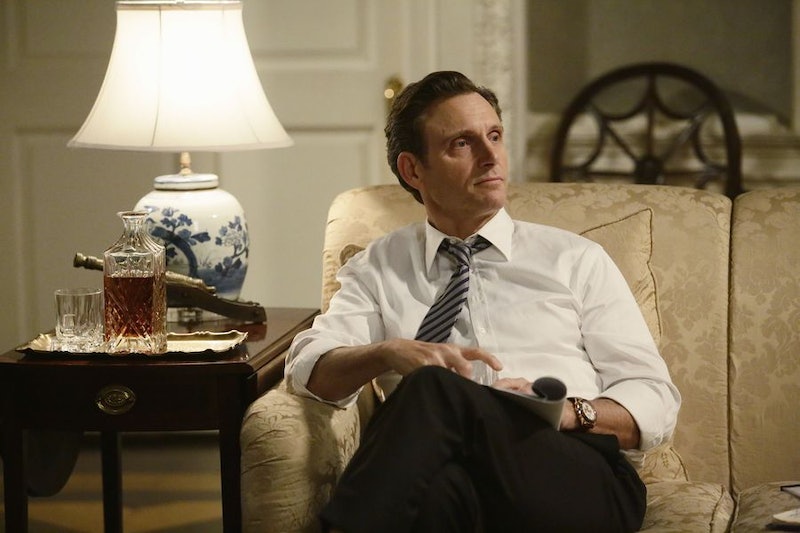 For the record, as long as I've watched Scandal, I've never been a big fan of Fitzgerald Grant. Every so often, he'll do something nice, but the way he's treated Olivia has never impressed me much. So when she finally decided to break free of his clutches, I was thrilled — but now, he's disappointing me yet again. Since his big breakup with Liv, Fitz has basically gone off the rails, but that's all about to change. Olivia discovers that secret service agents contributed to the death of a sex worker on Scandal this week, and as soon as she brought it to Fitz's attention, it seemed like he finally got the inspiration to be who the country needs him to be.

At first, it seemed like a pretty routine Pope & Associates assignment. The agents contacted Olivia via Abby to help them cover up the death of a prostitute who died after doing drugs. Obviously, these agents don't want anyone to know that they had said prostitute in their hotel room, so Huck and Quinn do what they do best — make the whole thing look like an accident. But Marcus, the newest member of the OPA team, digs a little deeper into it, and discovers that this death definitely wasn't accident. And somehow, this one event leads to Fitz totally reorganizing his priorities.

So how did this all go down? After talking to the woman's friend who was there that night, they find out that she hit her head on a coffee table after she got in a fight with the guys about payment. The secret service agents then gave her double the amount of heroin that would kill her and let her die, calling Olivia instead of 911 like they should have. And although her clients pay her to keep their messes a secret and fix them, she decides this time, it's worth making things right.

Um, let's just hope that this is how things work in Shondaland's government, not the actual US. That's really, really scary.

This new information prompts Olivia to go to Fitz and tell him what happened, and he's basically just like, "whatevs, thanks for telling me." Fitz, that is not the right response! But he hasn't exactly been on his game lately. He's been having a lot of women over to spend the night at the White House, and the secret service has been keeping it under wraps for him. And even though he didn't realize it, by doing that, he's not setting a good example for the people who work under him and look to him as a role model.

But fortunately, after talking to Susan Ross, who says she isn't interested in his endorsement for president, he realizes he needs to make a few changes. He ends up firing the agents and having them arrested, and finally, it seems like his reputation might be able to make a turnaround after all. Hopefully, that doesn't lead him back to Olivia in the end. I know, I know — so many people love their relationship. But if you ask me, I'm glad they're both moving on.