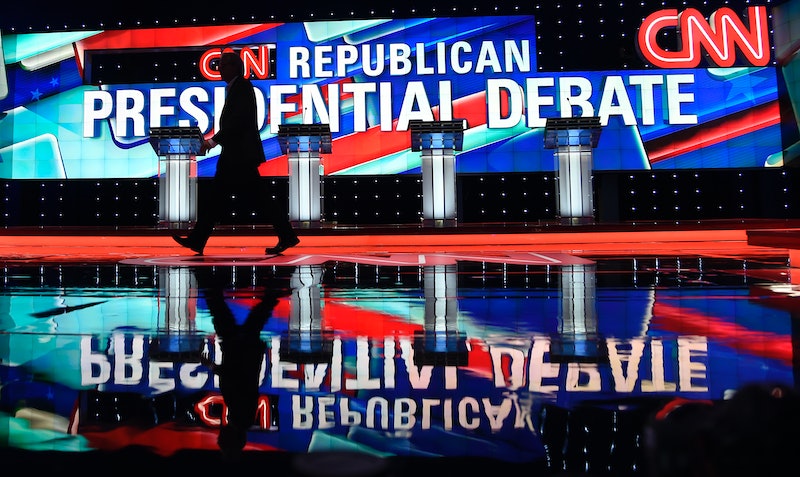 Well, sad to say, the folks at CNN have done it again. On Thursday night, with the final Republican presidential primary debate looming, the cable news outlet decided to let everybody know exactly how long they had to wait, listing an 8:30 p.m. ET start time, complete with a big countdown clock splashed across the stage. But then, as the timer dwindled to within 10 minutes of the big event, the rug got pulled out. Simply put, people weren't happy with CNN's late debate start, and they made their displeasure felt across social media.

It's kind of funny, and kind of sad, how CNN screwed with everyone tonight. It's hard to say at this early juncture whether there was some kind of snafu that necessitated things being pushed back, or whether this was the plan all along. But it's not exactly a good look for a news channel that very much aspires to be a news source of record — the whole world was led to believe this thing would be going down a full 30 minutes before it actually will, and that's sure to throw off more than a few people's evening plans.

Obviously, 30 minutes isn't exactly the longest delay, or the biggest issue in the world, but it's still a little dispiriting. Especially considering CNN just filled up the extra time with the usual pre-debate chatter and expectations-game analysis, which is... well, let's just say it's not always the most scintillating stuff out there. Thankfully, by the time 9 p.m. ET finally rolled around, they actually got things back on the rails. But this much is plainly obvious: The next time CNN promises you a mid-hour debate start time, you shouldn't take their word for it.