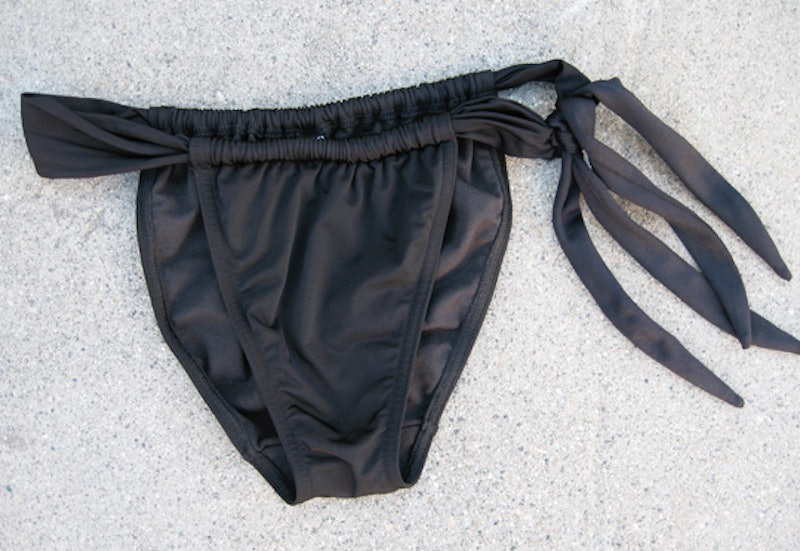 Why? Well, as she tells it, she was approached by park employees when she was in the pool and asked to put shorts on over her bikini. Sheaffer refused, citing that the park was full of other women and girls wearing bikinis the same size as hers. The employees called their supervisor, who reiterated the need for Sheaffer to cover up, this time adding that she needed to put on a shirt as well as shorts. Sheaffer refused again, and the police were called to escort her and her daughter out of the park.

Whoa. What? Sheaffer says she thinks she was targeted because of her age and her body type. She told ABC News,"Just the fact that there were other girls wearing string bikinis — 15, 16, 18 years old — beautiful young bodies, and they are not being told to cover up. I mean, do I have to be 16 and look 100 percent perfect to wear a bikini? Or can I be comfortable in my own skin? Am I allowed to have a matured body?"

This situation makes me so angry. Middle-aged women's bodies are so offensive that they have to be covered up with clothing on a hot day, at an establishment designed for people to be wearing as little clothing as possible? No. Sheaffer doesn't need the permission of Adventure Oasis, or anyone, to wear what she feels comfortable in. She was a paying customer doing what women have the right to do in the United States: Enjoy themselves, in public, wearing clothing of their choice. She didn't break any laws, and I doubt she broke any rules, either, considering that wearing a string bikini at a water park is completely and utterly appropriate. This is discrimination, pure and simple, ageism, and sexism wrapped up in the guise of some sort of puritanical ideal of propriety.

Sheaffer also recently lost 100 pounds, and says she was finally able to feel comfortable wearing a bathing suit, so that makes the bizarre actions of Adventure Oasis sting even more, I imagine. I'm glad Shaffer has brought public attention to the way she was treated at the water park. The employees and management at Adventure Oasis need to learn that women's bodies are not theirs to comment on, to judge, or to cover up.

More like this
Meghan Markle’s Favourite Skincare Brand Has Finally Landed In The UK
By Tomi Otekunrin
How To Master Baby Braids, According To TikTok
By Tomi Otekunrin
What Is “Jello Skin”? The Latest Viral Trend To Know About
By Tomi Otekunrin
Reviewers Are Obsessed With These 45 Things That Look Good On Everyone & Are So Damn Cheap
By Carina Finn
Get Even More From Bustle — Sign Up For The Newsletter