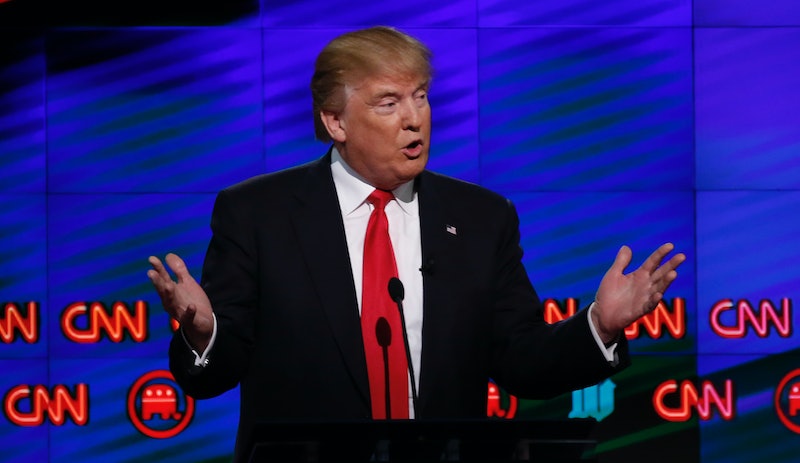 During Wednesday night's Republican presidential debate, a great number of issues were kicked around ― immigration, tariffs, ISIS, the VA ― and, of course, one of the chief foreign policy issues the GOP tends to focus on: the safety and security of Israel. And, after previously stating that he'd remain neutral between Israel and Palestine for the purposes of working on a peace deal, Donald Trump mentioned an old ceremonial position in an attempt to burnish his pro-Israel bonafides. So, was Donald Trump really the Israeli Day Parade Grand Marshal?

As is sometimes the case with Trump's extemporaneous, mid-debate proclamations, there's a kernel of truth in there, although it's obscured by a little misdirection and misstatement. Here's the reality: Trump's never been the Grand Marshal of anything called the "Israeli Day Parade." What he did participate in was the Salute to Israel parade in 2004, and indeed, he was the Grand Marshal.

Of course, this doesn't necessarily mean that he knows anything about the state of Israel, nor the kind of diplomacy it would take to engineer a peace deal in the Middle East. That's another kind of misdirection altogether ― the idea that marching in a parade makes you presidential timber on a related issue.

Trump was also right when he pointed out that he has a Jewish daughter and son-in-law. He was talking about Ivanka, one of his foremost surrogates, who converted to Judaism in 2009 before marrying her husband, Jared Kushner. Again, whatever insight this is supposed to give him when it comes to hashing out a peace deal between Israel and Palestine ― which Trump has cannily described in the past as "the toughest negotiation anywhere in the world" ― isn't entirely clear. There are plenty of people with Jewish friends, family, and loved ones who'd probably be no better off negotiating such a deal than a random person nabbed off the street.

But that's part of Trump's dizzyingly successful brand of low-content patter. By continuing to talk, and talk, and talk, and never ceding an inch even when his insights are obviously incomprehensible or irrelevant, he's managed to vault himself to the head of the Republican presidential race. You won't have to wait much longer to see how Wednesday night's debate went over with voters in Florida ― the state's GOP primary is going down on Tuesday, March 15.