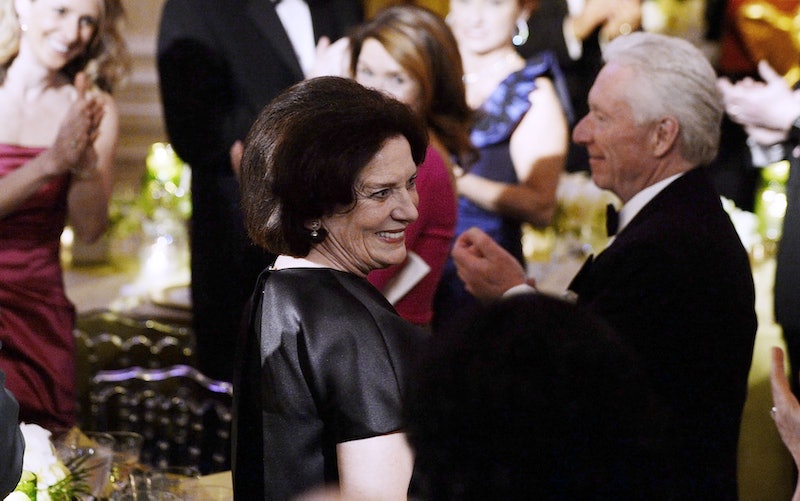 A 60 Minutes profile on Canada's dreamy new leader mistakenly identified his mother as Sex and the City actress Kim Cattrall last week, leaving everyone wondering, who exactly is Justin Trudeau's mom? Turns out, the Canadian prime minister's mother is a well-known political personality who's also widely beloved in the country.

After making every conscious effort to avoid attracting media attention during her son's campaign, Margaret Trudeau returned to the spotlight the day her son was sworn in as prime minister with tears of joy spilling down her face. "He's my boy and he's taking on the biggest, biggest job," she said in an interview with the CBC's Wendy Mesley shortly before Trudeau was sworn in. In another interview with Carol Off of the CBC program As It Happens, Trudeau was just as enthusiastic about her son's victory: "I couldn't have been prouder of him last night. ... It's a tremendous victory for Canadian people."

A self-described "flower child" once charged with possession of marijuana, Margaret doesn't appear to be the typical mother — let alone wife — of a politician. She first entered the hearts of Canadians as the young wife of the country's 15th prime minister, and Justin Trudeau's father, Pierre Trudeau. The two first met in Tahiti when she was only 18 and vacationing with her family. In 1971, at the age of 22, Margaret quietly married Canada's famous playboy prime minister, who was nearly 30 years her senior.

As the daughter of James Sinclair, a cabinet minister and Liberal member of Parliament, Margaret was familiar with what the political spotlight required. However, despite an upbringing peppered with political speeches, she had trouble adjusting to the new role her marriage had thrust upon her. In her 1979 memoir Beyond Reason, Margaret likens the seven years she served as the spouse of the prime minister of Canada to being imprisoned in a mental hospital. "A glass panel was gently lowered into place around me, like a patient in a mental hospital who is no longer considered able to make decisions and who cannot be exposed to a harsh light," she wrote.

During her time living at 24 Sussex, Margaret made headlines more than once for her free-spirited nature. During a trip to Latin America, she reportedly serenaded the Venezuelan President Carlos Andrés Pérez and his wife with a song she wrote herself and jumped onstage to advocate for women's rights at an event in Mexico. Just after news of her separation from Pierre became public in 1977, she was linked to the Rolling Stones and was photographed dancing wildly at Studio 54.

Margaret's past, however, is more than just one wild party. In 2006, she became a vocal advocate for people with bipolar disorder after being retroactively diagnosed with the illness herself in 2001 after checking herself into the Royal Ottawa Hospital. She told The Globe and Mail she wanted to repay the Royal Ottawa Hospital for all they had done for her in treatment, but did not, at first, think to take on such a high-profile role. "I thought I would be selling tickets to the gala," she said. "But they said, 'I think you should be an advocate. Be a champion.' It was scary the first time, but it was the realest moment in my life. ... I am sure it's how someone who has hidden something all of their life feels. What a relief."

With her son pushing Canada into the international spotlight, it's likely the world hasn't seen the last of Canada's Maggie, although this time she seems content to play just the roles of proud mother and doting grandmother.

More like this
How To Fight For Reproductive Rights, Based On How Much Time You Have
By Courtney Young
The Music Industry Continues To Fail Black Women
By Precious Adesina
President Zelensky Spoke Out On Ukraine's Chances Of Hosting Eurovision Next Year
By Sam Ramsden
Sarah Everard’s Killer Wayne Couzens Is Appealing His Whole-Life Sentence
By Sophie McEvoy
Get Even More From Bustle — Sign Up For The Newsletter