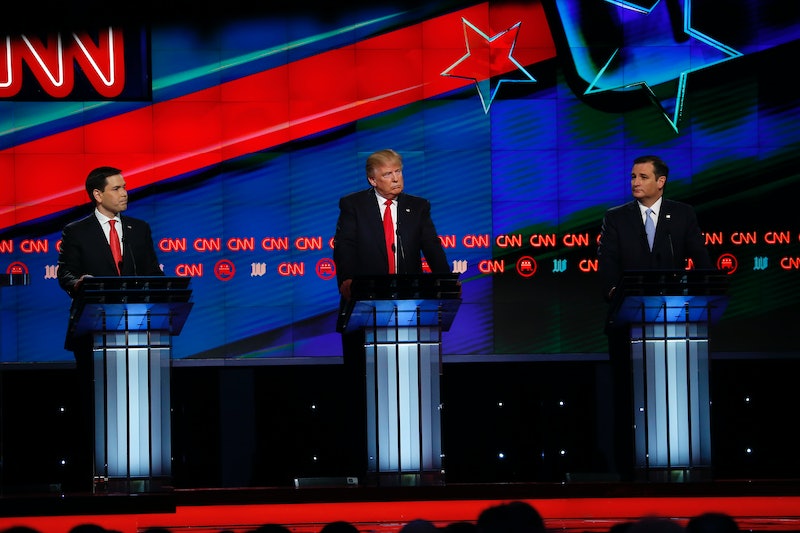 As Donald Trump, Marco Rubio, Ted Cruz, and John Kasich stood on stage in Miami on Thursday, a surprising climate change question at the GOP debate finally brought up a key issue for the skeptical party. Not all the candidates addressed the question, but it was still the most substantive climate change discussion the Republican candidates have had thus far in the primary election. Of course, the conservative politicians weren't quick to advocate for legislation to help combat climate change — or even say that the problem was caused by human activity.

The moderators asked Rubio if he would honor Miami's Republican mayor, Tomas Regalado's, request for him to acknowledge the scientific consensus of climate change and pledge to do something about it. Rubio responded: "Well, sure if the climate is changing and one of the reasons is because the climate has always been changing. There's never been a time when the climate has not changed." The Florida senator has always opposed the idea that people have had a negative impact on the climate, so his answer shouldn't have shocked anyone. He went on to explain that passing legislation to help the environment would drive businesses out of the country, which would increase the prices of goods and hurt American consumers.

When CNN's Jake Tapper specifically asked him about man's contribution to climate change, Rubio deflected somewhat, saying that no legislation will stop the sea level from rising or impact the environment in any way. "All these other things that are happening would continue to go on for a lot of different reasons. One, because America is not a planet. It's a country," he pointed out, in case you were unaware. "And number two, because these other countries like India and China are more than making up in carbon emissions for whatever we could possibly cut."

Kasich was also asked to address Mayor Regalado's question, and the Ohio governor said something you don't usually hear come out of a Republican politician's mouth: "I do believe we contribute to climate change." He explained that he doesn't think it has to be a decision between environmental regulations and jobs. "The fact is that you can have a strong environmental policy at the same time that you have strong economic growth, and they are not inconsistent with one another," he said. Kasich's position was the exact opposite of Rubio's and much more progressive than any other current or former GOP presidential hopefuls'.

Although Rubio's answer disregarded scientific fact and the two leading GOP candidates weren't asked about the topic, it was at least a little promising that a Republican debate included a real question about global warming. Previous forums haven't breached the subject, which many people believe is one of the biggest challenges facing the world today. The environment is such an untouched issue within the GOP that it was legitimately shocking to hear it brought up Thursday night.