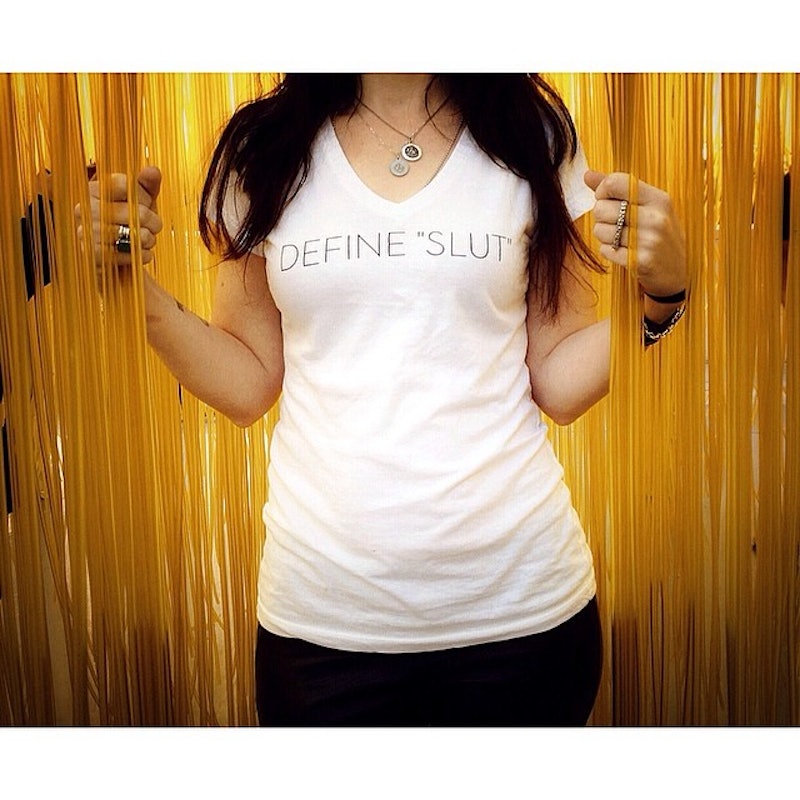 Emily Lindin, the founder of The Unslut Project, was the first person in her class to go through puberty. She was 10 when boys started looking at her, and one of them was an older guy she liked. One day, he and another popular guy convinced her to go to third base with them.

"It wasn't even sexual. It was like playing doctor to me," Lindin tells Bustle. She felt coerced and talked into it, but after the incident, the two boys spread a rumor that she had been the one to seduce them. "They said I had sex with him, that I was having sex with older guys. The next week at school, everything seemed to fall apart for me." She began to think of herself as a worthless slut, and was bullied at school. She began to have thoughts of self-harm, and considered transferring schools.

Lindin remembers all this and more in detail because she kept a meticulous daily diary as a teen, which she's now published under the title Unslut: A Diary and a Memoir, and which is filled with both heart-wrenching and '90s-nostalgic entries like this one:

In the end, things only got better for Lindin when she started dating a popular boy at the end of middle school and throughout high school. She couldn't be called a slut so easily when she was dating the same guy for four years.

But Lindin never forgot the experience, and 15 years later, when she began hearing about the suicides of girls who were slut-shamed and bullied, like Rehtaeh Parsons, Amanda Todd, and Audrie Pott, she was reminded of her own experience. She went through her old diary. "When I read these entries now as an adult, it rattled me to my core, because I blamed myself so much for it. I thought that I was just a slut."

So she put up her old journal entries on Wattpad, an online platform for reading and sharing stories, adding comments to her primary source, like footnotes.

At first, that's all she thought it would be — until the comments and stories started pouring in, "as if it were this invitation to others to start sharing their experiences," Lindin says.

It became apparent to her quickly how privileged she'd been, with socioeconomic resources and parents who were supportive and offered to help her transfer schools. "Most girls and most people don’t have that, regardless of their gender. So creating a space — an online platform where people could go through the catharsis of writing down what happened to them, maybe for the first time, and also find solidarity with people who go through something similar and ways that they overcame it — is part of it."

Lindin was so overwhelmed by the outpouring of responses to her Wattpad entries that the Harvard grad decided to found The Unslut Project, which describes itself as a platform to promote "gender equality, sex positivity, and comprehensive, age-appropriate sex education for all ages. This is a collaborative space for sharing stories and creating awareness about sexual bullying, 'slut' shaming, and related issues."

She also made a documentary film called Unslut , and can now be found touring the country talking about slut-shaming.

While statistics on slut-shaming as a form of bullying in schools is relatively limited, a survey of 1,965 students in grades 7–12 conducted in May and June 2011, Crossing the Line: Sexual Harassment at School, found that sexual harassment in school is incredibly common. Fourty-eight percent of students surveyed said they had experienced some form of sexual harassment in the past year, and sexual harassment by text, e-mail, Facebook, or other electronic means affected 30 percent of students. Not surprisingly, girls are especially vulnerable, according to the report:

Lindin attempts to combat this problem by speaking to young people and media across the country about slut-shaming. She likes to start the conversation in classrooms and random conversations alike here: "Define Slut." By asking people to define what a slut means to them, she quickly unravels the assumptions and logic behind their ideas.

"Luckily for me, when Jesus defended the adulteress, when everyone was going to stone her to death, he said, 'he without sin, throw the first stone.' So, Jesus was an anti-slutshamer."

"Often, people will message me things like 'once a slut always a slut,'" Lindin says. "I'll reply, 'what if when your grandmother was in her 20s she had sex with however many people you arbitrarily decide makes her a slut? And now, she is in her 90s and she hasn't had sex with anyone since your grandfather...but once a slut always a slut, like, are you going to call your grandmother a slut too?'" She says that usually makes them see her point. She likes this tactic so much that The Unslut Project has even designed teeshirts with the slogan "Define Slut."

Lindin says she recognizes the privilege she has a white woman; that she can wear her "Define Slut" tee-shirt walking down the street and still feel relatively safe — and she feels an obligation to use that privilege to help others. "Most people who approach me about the shirt are always surprised that I was labelled a slut because I look like a prude, or like a wholesome lady, and it is so funny to me. Because then I will say, 'Well, what do you think a slut should look like? I mean, in your mind, what is that?' And pretty quickly, they will realize that the point is that 'slut' can mean whatever the person using it wants it to mean. Girls are slut-shamed when they have never even kissed a boy, just because they were in the wrong place at the wrong time, and someone’s anger is directed at them for whatever reason."

Lindin also reads every story that is submitted to The Unslut Project — which unfortunately, also means she has to read several emails a day from trolls calling her a slut.

"I get very few, well reasoned, thought-out disputes or dissents against the mission of the project. Some people assume it is all about encouraging girls to have as many sex partners as they feel like, in unsafe ways, that type of thing, which it is not. So I respond to those, and that is a great place to start, and then maybe bring those people onboard. But a lot of the hatefulness is just like, 'I am going to find you and rape you.' That type of thing."

Obviously, she doesn't answer those. But, sometimes, religious people will email her and she'll engage them, even when they define a slut as someone who has had sex with more than one person. "I have to be able to reconcile that and bring them on board and say, 'That is fine for you, if you only want to have sex with one person in your life, nobody is telling you that you have to have sex with more people. But that is your life. What is the point of judging other people?' Luckily for me, when Jesus defended the adulteress, when everyone was going to stone her to death, he said, 'He without sin, throw the first stone.' So, Jesus was an anti-slutshamer."

Despite her daily encounters with trolls, Lindin says that she's seen some improvement in recent years when it comes to awareness of slut-shaming. When the project began in 2013, she says she'd say the phrase "slut-shaming" and people wouldn't know what she meant. Among people who read the news or who are relatively plugged in to social media, she says that rarely happens now. Still, we're far from living in a post slut-shaming world; a fact she's reminded of every day when she opens her inbox and reads the submissions from girls around the country sharing their stories — along with her hate mail.

"When we see movements to reclaim the word [slut], to say 'I am a slut and I am proud of it,' I think that is a little misguided because we are not there yet," she says. "Eventually, hopefully, it will have no emotional power [but for now] it is not just that word. It is the whole concept — that a woman can be labelled this way because of a vague rumor or even her actual sexual behavior. That she has to be put in this tiny box so we can understand her, and that she can't be multilayered and be a dynamic person that has a sex life, but isn't defined by that sex life."

More like this
Please Respect Mia Khalifa’s Rebrand
By Charlotte Shane
What Is “Night Luxe?” Breaking Down TikTok’s New Aesthetic
By Courtney Young
Here’s What Sarah Jessica Parker’s Canned Cosmo *Actually* Tastes Like
By Emma Garza
Here's The Spiritual Meaning Of The May 2022 New Moon
By Nina Kahn
Get Even More From Bustle — Sign Up For The Newsletter