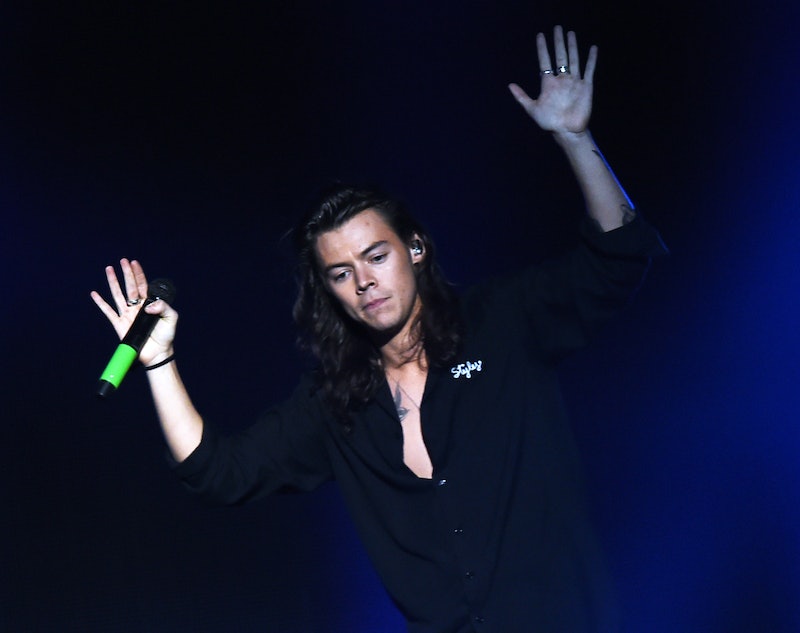 If One Direction really had to go on their hiatus, the only possible silver lining to that heartbreaking choice would be to see that its members are independently staying busy. Which is why I feel my heart slowly beginning to heal with the rumor that Harry Styles has been offered a role in the next Christopher Nolan movie. So the first question is, is the rumor true? Bustle has reached out to Warner Bros., Christopher Nolan, and Harry Styles and his team for comment, but, until the official word is handed down, it's anyone's best guess. All we have is the whispers that Styles has been offered a role, that it is assumed not to be a leading one, and that the film also stars Mark Rylance, Kenneth Branagh, and Tom Hardy. So the second question is, when we're talking about a level of talent that insane, can Harry Styles act?

I'm sure he's a perfectly nice boy, and he'll be a joy on set, but is he trained in acting? Short answer: no, he is not. Don't get me wrong. If I can't have Styles smoldering at me from the most recent 1D video, at least I can have you smoldering at me from amidst a star-studded Christopher Nolan cast. I'll take what I can get, and just keep my fingers crossed that it's somehow a musical so we still get to hear them croons. Unfortunately, that doesn't seem super likely, however, as the film is called Dunkirk, and centers around the evacuation of said French city during World War II, between may and June of 1940. And while I clearly wasn't there myself, my understanding is that there wasn't a ton of singing going on.

As for acting, while Hardy studied at the Richmond Drama School, followed by Drama Centre London, and Rylance and Branagh both studied at the Royal Academy of Dramatic Art, Styles didn't even get the opportunity to dip his toe into theater, as he was unable to finish high school because of joining 1D. Obviously, as a background character, Styles wouldn't need the serious chops of these award-winning Broadway and film performers — all three have been nominated for an Oscar, and Rylance won one for Bridge of Spies — it remains to be seen whether he can hold his own with no acting training at all.

The closest he's come so far is appearing in things as himself. Aside from One Direction's concert films, Styles also appeared alongside the band in an episode of Nickelodeon show iCarly called "iGo One Direction," where he played, you know. Harry Styles from One Direction. Otherwise, though he's rumored to be featured on Scream Queens Season 2 — or, at least, Lea Michele wants him to be — Dunkirk would be his real first theatrical role.

That said, I'll absolutely be turning up to the theater regardless, as will a bunch of Directioners, I'm sure, so it's a win-win for everybody involved.