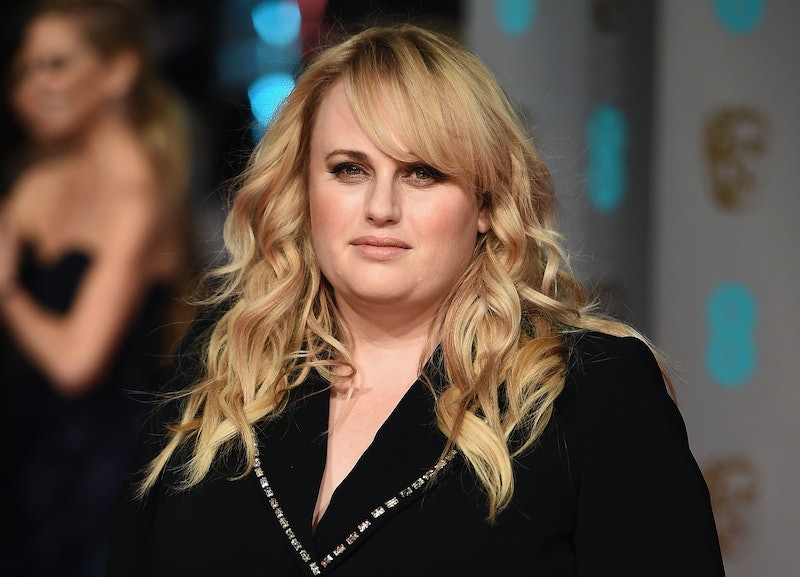 Rebel Wilson is one of Hollywood's funniest ladies, but she just revealed an experience she had that is, frankly, no laughing matter. Wilson, who has starred in The Brothers Grimsby, How To Be Single, and a slew of other popular comedies, opened up on Twitter about a scary incident that happened to her while out at a club recently. Wilson believes that her drink may have been drugged, and she's urging her followers, especially women, to be cautious of this scary reality that could happen to anyone when out at a bar or restaurant.

Wilson didn't reveal where she received the drink, simply saying that she was "at a trendy club," but realized before she even finished her drink that something wasn't right. She says she "got home safely but woke up this morning feeling like I'd been hit by a truck" and encouraged her followers to "please act as soon as you feel something strange and get yourself to safety."

It's definitely a call to caution for all of us, male or female, that keeping an eye on your drink and not letting it out of your sight is of the utmost importance. Here are Wilson's tweets on the matter:

According to womenshealth.gov, what are commonly referred to as "date rape drugs" are drugs like Rohypnol, GHB, and Ketamine "that are sometimes used to assist a sexual assault." The site further explains,

These drugs are powerful and dangerous. They can be slipped into your drink when you are not looking. The drugs often have no color, smell, or taste, so you can't tell if you are being drugged. The drugs can make you become weak and confused — or even pass out — so that you are unable to refuse sex or defend yourself. If you are drugged, you might not remember what happened while you were drugged. Date rape drugs are used on both females and males.

Also, these drugs are not merely used for aiding in assaults, according to the website:

The term 'date rape' is widely used. But most experts prefer the term 'drug-facilitated sexual assault.' These drugs also are used to help people commit other crimes, like robbery and physical assault.

The site suggests not accepting drinks from others, not losing sight of your drink, and having a sober friend with you as ways of preventing something being slipped into the drink, and if you do leave your drink behind, to get a new one.

Thankfully, Wilson realized something was wrong with her drink before she was put in danger, but it's a strong reminder for the rest of us to always exercise caution when out having fun at night.

More like this
The Column Accused Of Outing Rebel Wilson Has Been Removed
By Sam Ramsden
Daryl McCormack On His Unusual First Audition With Emma Thompson
By Olivia-Anne Cleary
Here’s How Lizzo Is Supporting Abortion Rights After The Roe v. Wade Reversal
By Brad Witter
Olivia Munn Got Real About How Her Body Hasn’t “Snapped Back” Post-Pregnancy
By Stephanie Topacio Long
Get Even More From Bustle — Sign Up For The Newsletter