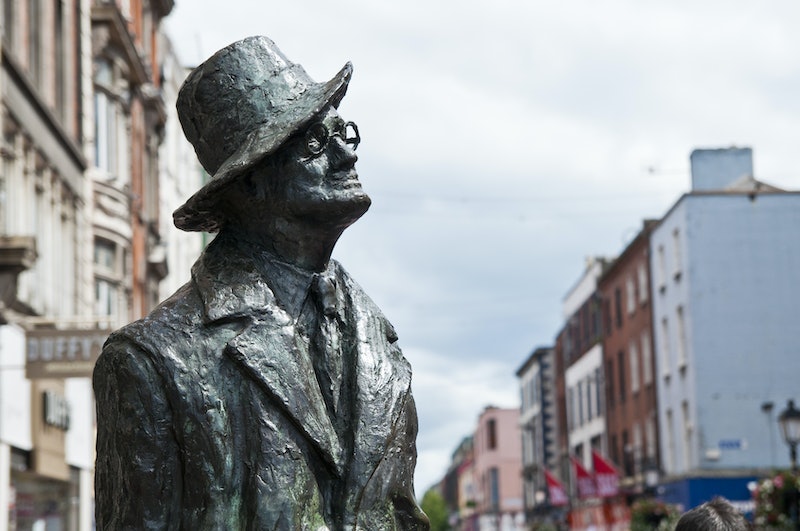 My first day of "Joyce class" in high school was a long, drawn out warning not to take Joyce class.

Joyce class had a reputation at our school. Seniors were allowed to take all electives as a trial-run for college, and Joyce was the crown jewel of humanities classes. It was renowned school-wide as the hardest class you could possibly take, but it was taught by everyone's favorite English teacher. Approval from him was worth the semester of lost sleep and a diminished social life. And we, the students of Hunter College High School, prided ourselves on our ability to ace academically rigorous classes without ever doing homework.

So the class was overenrolled. A third of the kids were sitting on the floor when our teacher arrived to tell us that we should not take his class. He stood at the front of the room and surveyed our tired faces, all somewhat shriveled from lack of sunlight (my high school is known for having tough academics and no windows). He informed us that Joyce is not a class for the weak of heart. If we were nervous, we could walk out of the room then and there. He wasn't afraid to fail us and ruin our college prospects.

If any of us were brave enough to stay in the class, however, we were to understand that we had sold our souls to James Joyce and his endless, syntactically inscrutable prose.

For a bunch of English nerds, it was absolutely thrilling.

Most of us wanted to take a class on Ulysses and A Portrait of the Artist as a Young Man because we were pretentious little monsters. One very intelligent boy in our class actually wore thick-rimmed glasses with plain glass lenses just for the look — until the summer after senior year, that is, when he found out he actually needed glasses in one of the world's greatest instances of poetic justice.

If you say that Ulysses is one of your favorite books, most people with assume that you are insufferable. Or that you haven't actually read it. Or that you smoke clove cigarettes and enjoy French cinema. And I'm not going to argue that those stereotypes are unfounded, or that it's an easy book to read. If you're going to read it ), the best way to read it is probably in Mr. Roundy's class, the way I did in the fall of 2010. But even if you find yourself unable to travel back in time and enroll in my high school class, it's worth a read. Because I'm faintly embarrassed to say that Ulysses is a book that actually, honestly changed my life.

Ok, so maybe I was already predisposed to be the kind of asshole who loves Ulysses. I'm the absolute worst person to have in a Shakespeare class, because I can't keep quiet. I will be that person who brings up the important semantic difference between "thou" and "you." Several men have been subjected to my lengthy views on The Aeneid on a first or second date. And, while at the Edinburgh Fringe Festival with my devised theatre troupe, I once raced across the city to catch an experimental stage adaptation of Ulysses.

So I'm already a pretentious dork. But even if I wasn't, I think Ulysses would have struck a chord. The story itself doesn't have much plot: Leopold Bloom, an Irish Jew, wanders around the city of Dublin. His wife, Molly, cheats on him. He runs into Stephen Dedalus, a lapsed Catholic and moody hipster. It all takes one day.

But, of course, it's much more than that.

One chapter is written in an evolving version of the English language, morphing from ritual Latin to Old English to "modern" Irish slang. It's the hardest chapter to read by far. Another chapter takes the form of a full-length surrealist play as Leo and Stephen drink absinthe and go to a brothel while hallucinating. Each chapter is inspired by a corresponding chapter of The Odyssey, so that the entirety of Odysseus's journey is folded into a single day of Dublin wanderings.

It is, in some ways, much easier to read than you might think, full of puns and child-like language (Leo Bloom spends much of his first chapter talking to his cat). It is, in other ways, much harder to understand than you can possibly fathom. Joyce has created something that is equal parts puzzle and book, with a final chapter that is essentially a 36 page run-on sentence.

As a book, it is confusing, vulgar, rambling, hilarious, and transcendent. It's the everyday shot through with the divine. An ordinary man lives an ordinary day, and in doing so, he cycles through the whole of the human experience. It may sound like pretentious drivel, but Joyce pulls it off.

I remember when we reached the chapter of The Wandering Rocks, the only chapter in Ulysses that doesn't directly match a book of The Odyssey. The Wandering Rocks are a group of merciless, ship-crushing rocks in the sea of Greek Mythology. Odysseus never encounters them, however. He's offered the choice of trying to navigate the dreaded Wandering Rocks, or to pass by Scylla and Charybdis, the two sea monsters. He chooses the monsters (which probably makes for more interesting reading than rocks, anyway).

In Joyce's Ulysses, the chapter Wandering Rocks means to show the road not traveled: there are no literal rocks, but rather the chapter dips in and out of various side character's heads, giving us a quick snapshot of their stream of consciousness and POV. I struggled through reading the chapter on my own, nonplussed by the sudden shifts between all these random, pointless characters. In class, however, our teacher explained the chapter as a peek at other possible protagonists for Ulysses. The point of the chapter is to show that every single person, no matter how irrelevant they seem, could have easily been the protagonist. They each live their own Odyssean journey each day. They each contain multitudes.

Of course, there were many aha moments, both while reading the book and sitting in class. A book as hefty and notorious as Ulysses is nothing if not complex. But that moment stuck out to me, as a high schooler on the verge of adulthood: it was the opposite of a chosen one narrative. It was not about one singular genius. It was about the genius and complexity of every ordinary person.

Ulysses isn't necessarily saying that we should all appreciate the mundane parts of life, and stop striving for something greater, though. Ulysses is saying that there are no mundane parts of life. It's all a great, epic, pretentious, beautiful, confusing mess. Walking down the street, or eating a sandwich, or fantasizing about the cute guy on the bus—it's all driven by the same emotions that led Odysseus back to Ithaca. Everything is infused with high literary greatness, if only you look at it in the right light.

That, after all, is the power of good literature. It messes with your mind and shifts your outlook on life, ever so slightly. As a sullen 17 year old, I needed a classroom and a top-notch teacher to jump-start that whole outlook shift. Now, when life feels hopelessly ordinary, and I need an infusion of the literary divine, I still turn to Ulysses. It certainly deserves its reputation for being an utterly baffling piece of work. But it also deserves its reputation for being one of the most life-changing puzzles you could ever possibly read.