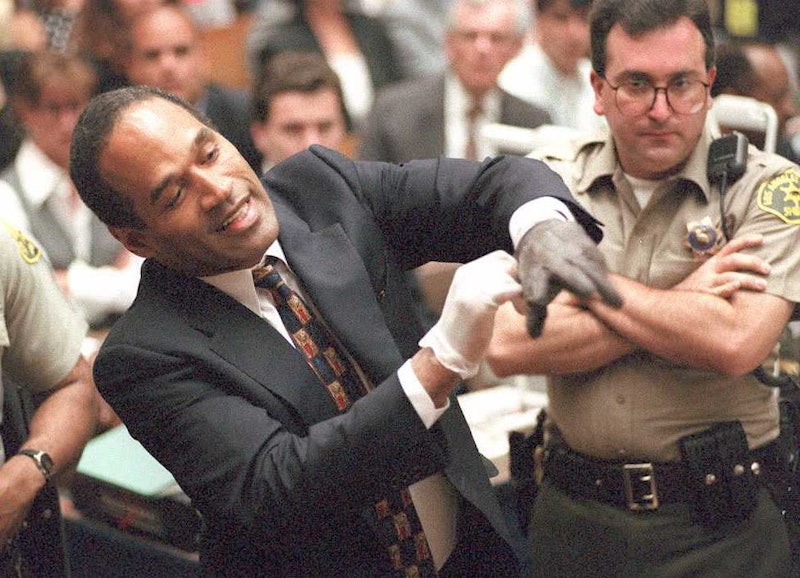 If you weren’t alive during or weren’t old enough to understand the O.J. Simpson trial, American Crime Story: The People Vs. O.J. Simpson has done a pretty good job of not only explaining the proceedings, but also the circus that went on around it. Every journalist and looky-loo in the country wanted a piece of the action. And one of the most talked-about moments was when O.J. Simpson put on those now iconic gloves, causing his defense attorney Johnnie Cochran to utter the famous line: “If it doesn’t fit, you must acquit.” So, did the gloves really not fit Simpson during his trial? Well, he was acquitted in 1995. (However, according to The New York Times, he was found liable in the resulting 1997 civil suit and ordered to pay "$25 million in punitive damages to the families.")

The gloves themselves are perhaps the most well-remembered piece of evidence of the whole trial. According to NBC Los Angeles, police said in the initial investigation into Nicole Brown Simpson and Ron Goldman’s murders that they had found a blood-covered glove at the scene of the crime. Later, then-LAPD Detective Mark Fuhrman scaled a wall to get into Simpson’s property and found another glove — the counterpart of the one found at the crime scene — also covered in blood.

According to The Seattle Times, it was soon revealed that Fuhrman used frequent racial epithets while on the force, and Simpson’s defense team jumped on it. As reported by The New Yorker, Simpson’s defense team asserted that Fuhrman must be a racist and planted the glove evidence to punish Simpson for being black. Remember, this wasn’t too long after the Rodney King trial, so racial tensions were high in Los Angeles. Calling Fuhrman into question called all the evidence he into question, including those DNA-covered gloves. In his book Murder in Brentwood, published after the trial in 1997, Fuhrman wrote, "I apologize for the pain I caused with my insensitive words. However, one thing I will not apologize for is my policework on the Simpson case. I did a good job; I did nothing wrong."

During the trial, according to NBC News, both judge Lance Ito and prosecutor Christopher Darden insisted that Simpson try on the glove in court. Of the situation, prosecutor Marcia Clark told NBC News, "I was miserable from the moment that Chris said, 'No, I'm doing this.’ And I never expected anything good to come of it." Much to Clark’s chagrin, Simpson put the gloves on in court and they seemed to be too tight.

Simpson's defense argued that he never wore the gloves and that’s why they didn’t fit. But, Clark claimed to NBC News that the latex gloves worn underneath the leather gloves so as not to contaminate them “[screwed] up the fit.” Fred Goldman, victim Ron Goldman’s father, echoed Clark’s sentiments about the latex on 20/20, also claiming that since the gloves were soaked in blood that allegedly altered their shape. Finally, author Laurence Schiller, who had access to Simpson and the defense team during the trial, claimed to ABC News that Simpson had arthritis and, according to defense attorney Robert Kardashian, Simpson had not taken his anti-inflammatory medicine for several weeks prior to the glove testimony. In an interview with Romper, Schiller expanded upon the claims that Simpson was not taking his medication.

"Nobody knows whether it made his hands a little bigger or not," Schiller said to ABC News.

No matter the reasoning, the gloves did not fit Simpson’s hands, and it will forever be a moment that rocked the nation as millions watched the trial unfold on television.