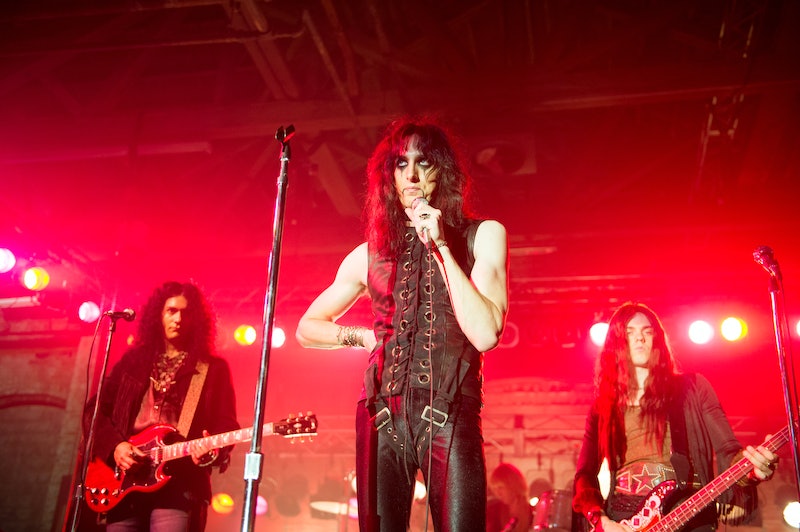 HBO's Vinyl is painting a vivid and diverse picture of the New York City music scene in the 1970s, complete with several real figures from the time period that interact with the original characters. Unlike other period pieces on television, these iconic musicians are essential to creating a world of music historical fiction. Dustin Ingram, who played Alice Cooper on Vinyl, was tasked with bringing one of these living legends to life on screen.

"It's the first time I've had to really pay tribute to a real person on film," Ingram says. "There's an incredible amount of responsibility that comes with that and it kind of weighs on your shoulders more and more the closer you get to your first day of shooting." In the episode, Jack Quaid's character courts Alice Cooper and ends up on a bit of an epic journey involving eye-liner, snakes, guillotines, and 18 holes of golf. The latter, incidentally, is what Ingram found the most nerve-wracking to pull off.

"The most important thing to me was making sure I had a believable golf swing," the actor says. "Because [Alice Cooper] was incredibly talented even when he was just starting ... I knew if there was anything that he was gonna scrutinize it was gonna be the swing and if I didn't get that right and if it looked crappy I feel like he would just turn it off — immediately, then and there."

The fact that Alice Cooper was, and still is, such an avid golfer is a lovely piece of real world juxtaposition — you couldn't write better opposing character traits — that seems to be common knowledge for some and a complete mystery to others. It's a big part of Cooper's life that you might not guess from his on-stage persona. When I asked my Dad about it (because who else is a millennial supposed to consult about all things Alice Cooper), I learned that he played in a tournament I attended once, so apparently even I have no excuse.

Golfing aside, being a rockstar comes with a lot of power, even if you're just playing one on TV. "There was a moment where we were shooting in Manhattan and I was in his all-white getup," Ingram recalls, "I had a period Budweiser can in my hand ... because it was basically an extension of his arm at that time. They came and got me out of my trailer and I was walking down the streets of Manhattan to get to set, to this amazing record studio that they had acquired, and a group of people that were passing by yelled 'Hey Alice! We love you!' — and there was nothing that could have put me in character more and made me feel more like a rock star. Very strange. It's a weird feeling."

Ingram won't be back on the show any time soon. That one episode is the only glimpse of Alice Cooper we're going to get on Vinyl Season 1 — to be fair, his story with Clark did have a pretty definitive end. "I would really honestly like to live out any part of his life," Ingram says. "Even now, because he's still doing it!"

Still, fingers crossed that he pops up in Season 2, which has already been announced. As for Season 2 potential, "we sort of touched on the start of his Billon Dollar Babies Tour," Ingram says, "but I would love to do a full number from that tour ... Probably, honestly, the "I Love The Dead" number where he actually got his head cut off. You know, Jack [Quaid] got to experience it. I would love to have my head in the guillotine as well."