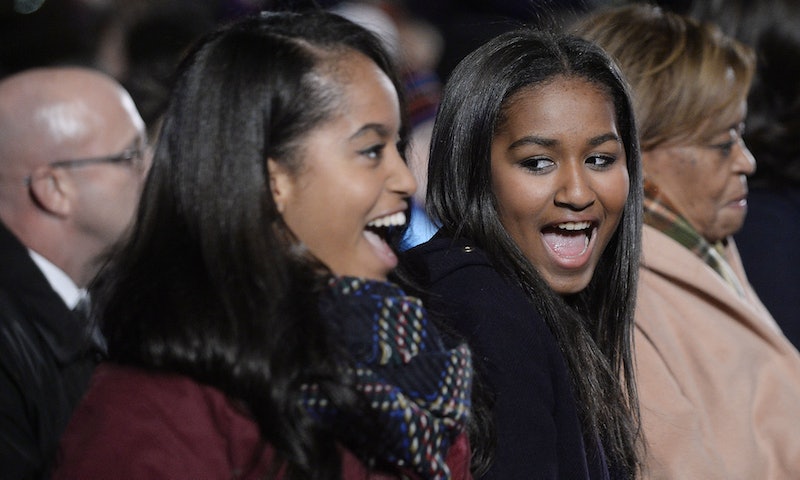 Outsiders might think that growing up in the White House means you're invited to every other shindig your mother and father throw, but apparently not. Kiddie tables and presidential dinners don't necessarily go hand in hand. But recently, Sasha and Malia Obama attended their first state dinner and they brought their fashion A-game forward.

According to Teen Vogue, the state dinner was in honor of Canadian Prime Minister Justin Trudeau's American visit. Now that they are 14 and 17 years old, respectively, Sasha and Malia were invited to join. Just as many of us would treat a fabulous party, the ladies brought out their best gowns and their strongest fashion sense.

MTV News reported, "Sasha showed how quickly she’s growing up, looking finely sophisticated in a dress with lace appliqué and a braided up-do, while Malia... opted to keep her hair down (and flowing) and wore a beaded, strapless dress."

Even though the country has been drooling over FLOTUS Michelle Obama's fun and eclectic sartorial choices throughout the past eight years, it's nothing short of fun to see the First Daughters come into their own sense of style — styles that definitely differ from one another. My guess is that now that they're teens, they're no longer dressed by their stylish mama. Instead, they can show off their own tastes, which seem to be a hybrid of elegance with a touch of whimsy.

Malia appears to have a more classic, traditionally sophisticated taste. She opted for a classic white gown with a full princess skirt and intricate bead work running down it. Meanwhile, Sasha looked playful, sporting a bohemian-esque gown with burgundy lace applique, a summery side braid, and a very on-trend choker necklace. The choices showed the young women's distinct personalities, while still keeping things nice and formal for the big event.

As far as debutante events go, this was a wonderful one, and it was aptly Canadian-themed through and through. According to US Weekly, Michelle "chose a printed midnight-blue gown by one of her favorites, Taiwanese-Canadian designer Jason Wu." Those in attendance were also high profile Canadians, and the First Daughters got to rub elbows with them during dinner.

Popsugar reported, "Sasha was seated next to a Ralph & Russo-clad Blake Lively, whose husband is Canadian actor Ryan Reynolds. Malia, meanwhile, was able to sit beside Ottawa-born actress Sandra Oh."

Equipped with such grown-up gowns, I'm sure the ladies handled the company well for the evening.

And while the rest of us can swoon over how well our girls are growing up, the Canadian Prime Minister had a couple words to share about them as well.

I feel the same way Trudeau, I feel the same. And I can't wait to see how their remarkable childhoods and early teen years affect their styles in years to come. I think we might just have some new icons in the making.