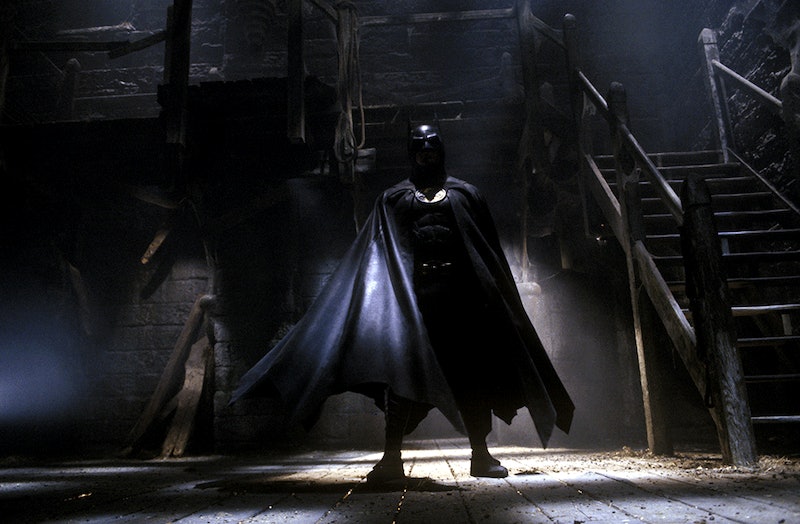 Growing up, I always thought it was really cool that Bruce Wayne basically became Batman by having a lot of awesome stuff — the Batmobile, Batsuit, and Bat signal — yet no innate superpowers. Being an insanely rich businessman with unresolved issues about his parents' deaths isn't exactly a power, yet it seems like it's always been a great motivator for Batman to save the day. But sometimes when he's rushed in to provide help, Batman has said some insane things. It doesn't matter whether he's live action or animated, being played by actors like Adam West, George Clooney, Val Kilmer, Christian Bale, or Ben Affleck — Batman is responsible for some seriously questionable lines.

Remember, decades before this month's Batman v Superman: Dawn of Justice, Batman was once the star of a in a '60s TV series with goofy theme music and comic book-like words flashing during fight scenes ("CRASH! BOOM!"). The Caped Crusader was also the main attraction in many '90s feature films that people either liked (Batman), hated (Batman & Robin), or merely loved for the soundtrack (Batman Forever). By the 2000s, Christopher Nolan's own Dark Knight trilogy got Hollywood to take the Caped Crusader seriously, thanks to huge popularity and several Academy Award nominations.

But in all of his forms, Batman can get a little Bat-crazy. Here are some of the most insane things he's said throughout his history.

Superheroes are supposed to save people, right? Here in Batman Begins, the Dark Knight gets all existential about it.

Batman said this to Dr. Chase Meridian in Batman Forever, thinking that she's attracted to him because of his car and saying that most women love the vehicle. Hey Batman, not all of us are superficial and into the fact that you have a cool ride. Maybe there's more to it and women are into you because you're a good guy — ever think of that?

Everyone knows the song "Everything Is Awesome" from 2014's The Lego Movie, but I think too often, people overlook the comedic brilliance of Lego Batman's brooding metal theme song, in which he sums up the essence of the Caped Crusader in the most hilarious way possible.

8. "You Thought You'd Unhinge Me," Said While Doing The Batusi

No words needed for this strange '60s dance, which originated from the TV series starring West. Yes, Batman dances. As illustrated in the clip above, he dance fights in an Ancient Egypt-themed lair.

7. "The Hammer Of Justice Is Unisex"

On the animated TV series Batman: Brave & The Bold, the Dark Knight says this to one of his enemies, who thought dressing like a woman would prevent him from getting defeated by Batman. This weird line even became a meme in 2013.

Sometimes, even superheroes need to acknowledge their shortcomings. In Justice League Unlimited, Batman summons help while he's plummeting to his maybe-death, because he can't fly.

In 1997's Batman and Robin, Batman (as played by Clooney) just drops in and casually introduces himself. Seriously?

4. "The Anti-Bat Sonic Device In My Utility Belt Would've Deflected The Beam"

West's '60s Batman had the greatest utility belt, apparently. Who needs superpowers? One thing his utility belt couldn't seem to deflect, though, was his attraction to Catwoman.

3. "I Never Leave The Cave Without It"

Batman & Robin featured the caped one whipping out an actual Batman credit card, a joke that's a nod to an old American Express commercial. But it's still so corny. Groans all around.

Maybe it's not the line itself, but what LEGO Batman says it in regards to in The Lego Movie — the Dark Knight is not having a fun time in the bright and sunny Cloud Cuckoo Land.

1. "A Guy Who Dresses Up As A Bat Clearly Has Issues"

In Batman Begins, Bale's Bruce Wayne says this at a dinner, and hey! He's totally talking about himself. But no one else at the table knows that.

Yet no matter what Batman says, he always seems to get the job done, and he'll always be a hero to me because of that.

More like this
What's New On Netflix: A Third '365 Days' Movie & Lili Reinhart’s New Film
By Arya Roshanian
What’s New On Netflix: 'Never Have I Ever' & 'Indian Matchmaking' Return
By Arya Roshanian
At 28, Lesley Manville Was Acting, Picketing, & Singing Kate Bush Songs
By Olivia-Anne Cleary
Everything To Know About 'The Hunger Games' Prequel Movie
By Grace Wehniainen and Radhika Menon
Get Even More From Bustle — Sign Up For The Newsletter