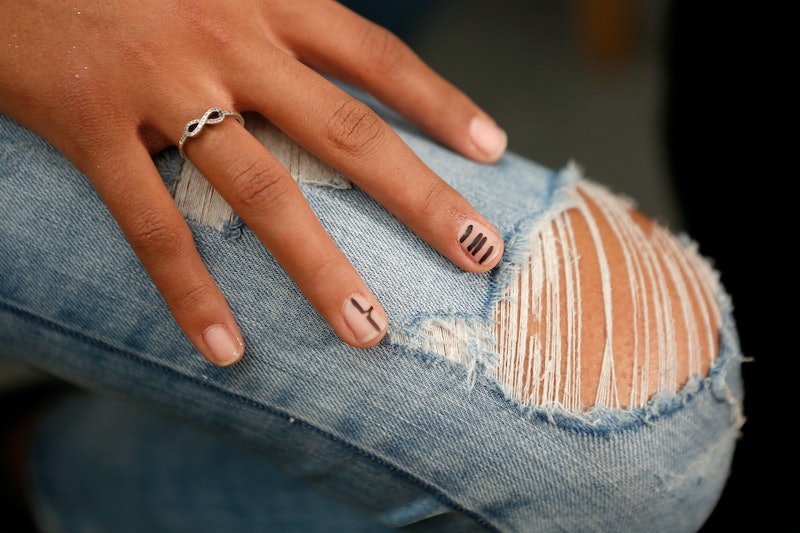 Doing your nails isn't supposed to put your health at risk. But that's exactly what you could be doing if you're guilty of these nail care habits that could be dangerous. But wait, aren't your nails dead? Well, the tissue and skin under and around your nails isn't, and it's delicate and prone to damage and infection. If you're not careful, you can end up with a nasty bacterial or fungal infection. And if you don't get an infection, you could still end up with a lot of pain. At the very least, unhealthy nails, cuticles, and skin don't look the best. You don't want hands that look like they just barely survived the zombie apocalypse.

With a few tweaks to your routine, you can eliminate a lot of nail damage and encourage a lot of healthy new growth. In some cases, you might need more than just nail help. For example, if you're a compulsive nail biter or cuticle picker because of anxiety or stress, you might need to work with a counselor to develop healthier coping mechanisms that don't involve destroying your nails and putting yourself at risk for infection. And if you do have an infection, you definitely want to address that before you worry about your manicure. But prevention is the best medicine when it comes to your nails, so your best bet is to nip dangerous nail habits in the bud.

Your cuticles serve an important purpose. They're a barrier that keeps things out, such as harmful bacteria. When you cut your cuticles, you increase your chances of infection, according to the University of Utah's Health Care department. It's better to use cuticle oil or a cuticle remover to soften the skin, then gently push it back with an orange stick or cuticle pusher. Keeping your cuticles moisturized will also help avoid cracks or hangnails.

Your nails are loaded with bacteria, but guess what? So is your mouth! When you put the two together, you're just asking for an infection. Not only can you get an infection in your nails, but you could be harboring the kinds of germs that cause colds, influenza, and other nasty sicknesses. You just don't want to do it. If you can't stop biting your nails, there are nail polishes made to have a horrible, bitter taste.

Clipping your nails can split your nails. It also leaves behind cracks. Sometimes the cracks are too small to be seen by the naked eye, but as you go about your daily life, the cracks get bigger, and cause your nails to peel and break. If they break or rip off close enough to the nail bed, you could experience pain, bleeding, and even infection. If you have long nails, you can still clip them with clippers. Just make sure to file them smooth afterwards. If you have short nails, it's better to skip the clippers altogether and just file for shape and length.

What is it about cuticles that makes them so satisfying to pick at? Well, since we've covered how much bacteria your hands come in contact with, we know that cutting your cuticles is like opening the front door and asking for unsavory neighbors to come in and stink up your house. It usually starts with a hangnail. If you keep your cuticles moisturized, you'll experience far fewer hangnails to being with. And when you do get one, you want to use a cuticle cutter to take off just the flap of dead skin that's poking out, then moisturize. If you do this religiously, you won't have any hangnails or dead skin tempting you.

If you've heard the phrase 3-free on your polishes, that number refers to potentially toxic chemicals that the product doesn't contain. The big three are DBP, toluene, and formaldehyde. These three chemicals give some people headaches, irritation, and other negative reactions. Formaldehyde is also a known carcinogen. You can check the Environmental Work Group website to examine the ingredients in your nail polishes and to find out if they have chemicals which might be contributing to any nagging irritation or health problems you have.

6. Biting Or Peeling Off Your Extensions

Even I, person who is obsessed with her nails, have to admit that I'm guilty of occasionally biting off my fake nails or peeling off my gel manicure. This is bad, bad, bad. When you do this, you're basically ripping the top half of your nail plate off. Your nails become thing, weak, and brittle. They seem to break when you just look at them. Plus, you're opening yourself up for infections and pain when you rip away part of your nail plate. If you rip away too much, and actually get down to the fleshy wart under your nails, you could cause damage that permanently affects the way your nails grow back. Better to take the time to soak them off with acetone or sand them off with a drill (or have your nail tech do that).

7. Doing Your Own Fake Nails

There's nothing wrong with doing your own fake nails at home — if you know what you're doing, that is. If you don't, you could leave air pockets. In those air pockets, moisture builds up, and where there's moisture, there's the potential for fungus and mold. It's even possible to get fungal infections if you get your nails done at the salon, though it's less likely if you go to a clean, reputable salon.

Who knew little things like cheap polish or using nail clippers could lead to so many problems? Well, you do now! So go forth at get fabulous nails in a safe way. Because if you've never seen a raging fungal infection, trust me, you're lucky.