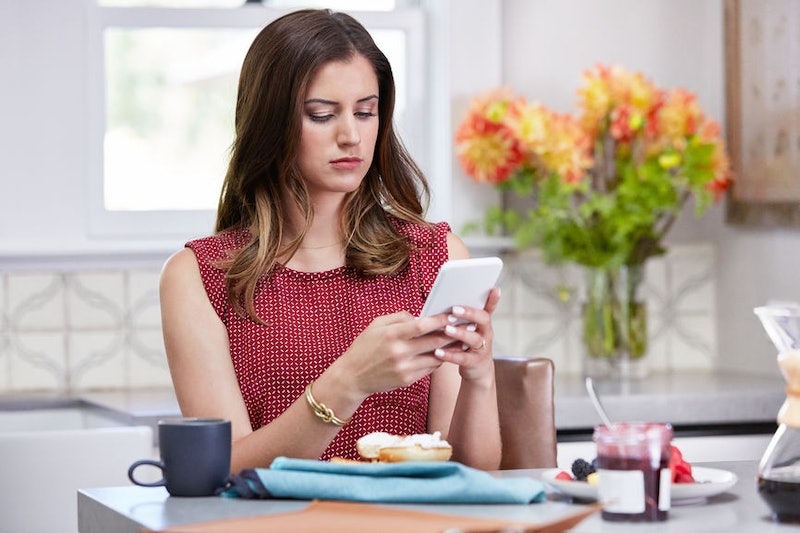 What some call “oversharing” might actually be helpful to all. A food poisoning prevention app that tracks tweets related to symptoms has been developed by computer scientists at the University of Rochester. So if you take to social media to complain about your stomachache, you could be helping to squelch a food poisoning epidemic. It’s nice to know that Twitter can be used for more than live tweeting The Bachelor (OMG Finale!).

The app is called nEmesis, a clever play on the word “Emesis,” which is the scientific term for “the act of vomiting”. However, “Nemesis” is also an ancient Greek god of divine retribution, whom I believe is responsible for doling out the cruel tummy punishment to those with the hubris to eat at their favorite dive-y restaurant after it has been given a C-rating.

nEmesis’ goal is to apply machine learning to Twitter data in order to track and prevent food poisoning outbreaks. Forty-eight million people in the US are affected by food-borne illnesses annually. While there are preventative practices in place such as restaurant inspections, the department of health is over-extended and these inspections occur too infrequently, leaving gaps of time for error. Researchers presented a paper detailing their findings at the yearly conference for the Association for the Advancement of Artificial Intelligence (AAAI).

To identify the restaurants that are getting patrons sick with poor food-handling practices, researchers developed a language model to identify which Twitter users were suffering from foodborne illnesses. Looking for mention of key symptoms such as “nausea,” and phrases like “#upsetstomach,” “so sick omg,” and so on, the app then uses the GPS location data within the tweet to geotag the nearby restaurant or venue where the user possibly contracted their illness. After identifying a positive phrase, the algorithm also reviews the user’s messages for the next five days to ensure it is food related.

Adam Sadilek, lead author of the paper and his and team performed a first successful trial run of the app in 2015. They tested the app in Las Vegas where there are over 16,000 legal food-serving venues to inspect. Unfortunately, the popular saying, "what happens in Vegas stays in Vegas" doesn't apply to tummy aches.

Over three months, one group of health department workers received suggestions from nEmesis on which restaurants to inspect determined by the algorithm, while a control group of workers received randomized suggestions (which is the normal protocol). After analyzing the data collected by the health inspector groups, researchers found that of the nEmesis suggested restaurants 15 percent were citation-worthy, and only nine percent of randomized suggestions yielded citations. Of restaurants that pose a serious risk to the customers health (around grade C or F), nEmesis identified 11 venues, while the control group only found seven.

The paper also stated that nEmesis has broader success when it comes to identifying the source of an illness, “this study also showed that social-media driven inspections can discover health violations that could never be found by traditional protocols, such as unlicensed venues. This fact indicates that it may be possible to adapt the nEmesis approach for identifying food safety problems in noncommercial venues, ranging from school picnics to private parties.”

The researchers estimate that using social media and their algorithm they were able to prevent 9,000 fewer food poisoning incidents over the three month study. "Adaptive inspections allow us to focus our limited resources on the restaurants with problems," Brian Labus, a visiting assistant professor at Las Vegas's School of Community Health Sciences, said in a press release. "The sooner we find out about a problem, the sooner we can intervene and keep people from getting sick." The method can also be applicable to locating bedbug outbreaks and much much more, says Sadilek: "Similarly, you can look what people tweet about after they visit their doctor or hospital. We're just beginning to scratch the surface of what's possible."