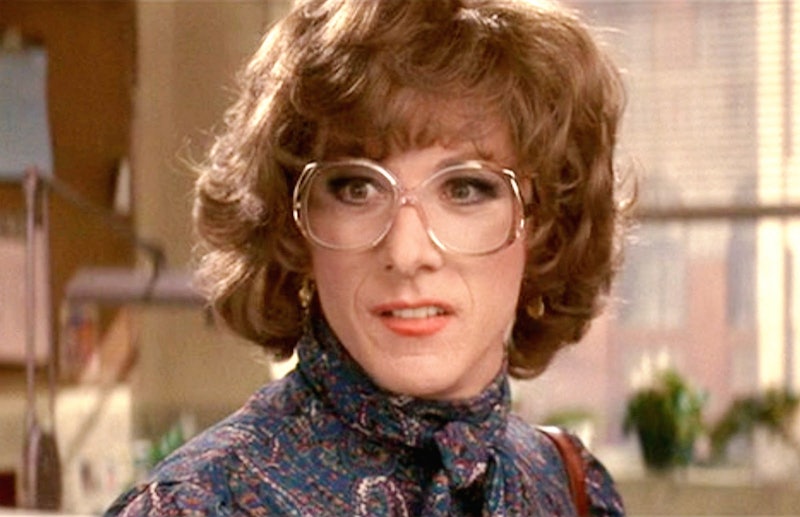 It doesn't matter if the movie came out in the early '80s or if this Dustin Hoffman interview is from last year, Tootsie is forever topical as long as there are still people out there who witness a woman's success and immediately wonder if she achieved her goals because she wasn't pretty, and therefore had to get scrappy. It happened to Wimbledon winner Marion Bartoli. After taking home the top trophy in her sport, on top of, you know, being a certified genius, a sports announcer wondered on air if her dad told her she had to be a fighter since she was "never gonna be a looker."

If only that BBC commentator would dress up as a woman and try to get a role on a soap opera. It's what made Dustin Hoffman see the light. And by "light" we mean the cloudiness that fogs mens' brains.

In an interview with AFI, the actor became teary when talking about his transformation in Tootsie . It all clicked when he realized his instinct was to become a beautiful woman, because, well, if a woman isn't beautiful, what's her point?

Aware of his affliction, Dustin recalls how he broke down at home after a day on the set. He told his wife he had to make the movie because of the double-standard that was brought to his attention.

"I think I'm an interesting woman when I look at myself on screen, and I know that if I met myself at a party, I would never talk to that character because she doesn't fulfill physically the demands that we're brought up to think women have to have in order for us to ask them out."

"There are too many interesting women I have not had the experience to know in this life because I have been brainwashed."

Sounds like that BBC announcer should try on some heels. Game, set, match: Dustin Hoffman.