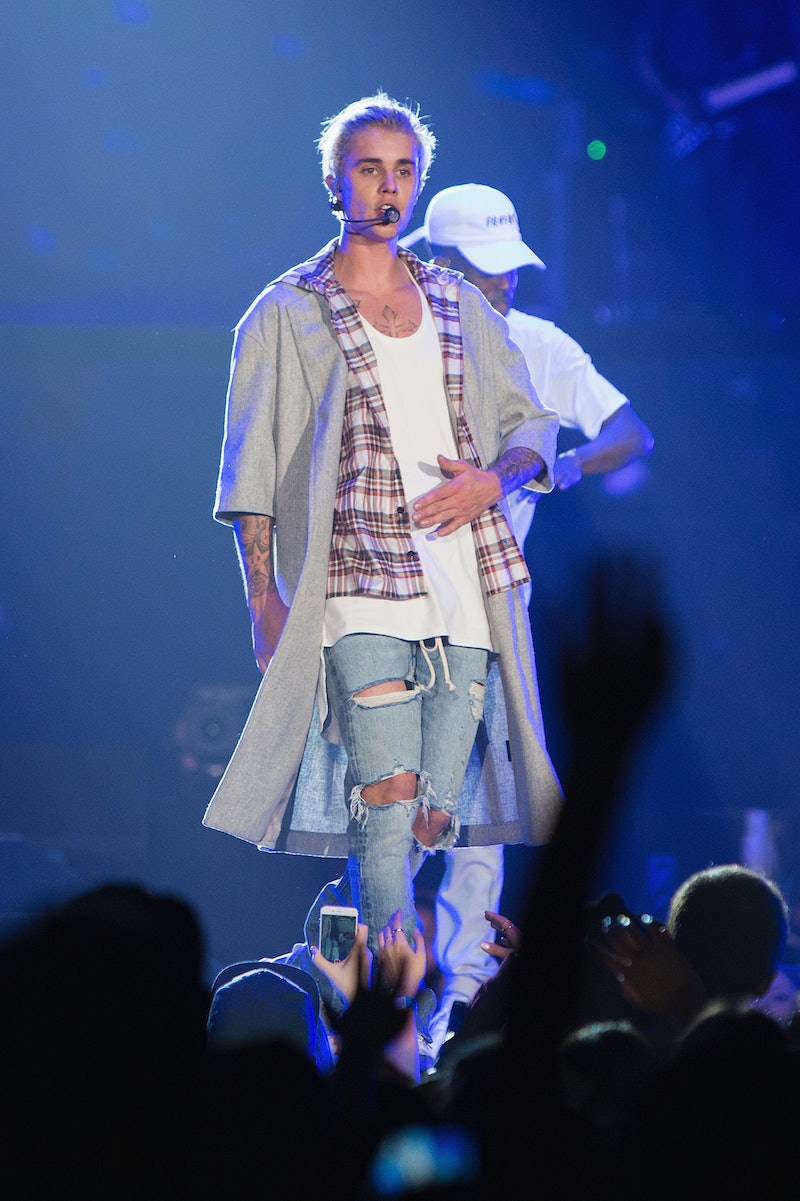 It seems like only five years has gone by since Justin Bieber was a fresh-faced lad ending his first tour, the My World Tour. Oh, it was only five years ago? You mean Justin Bieber is only 22 years old and has only been in the public eye for about six years? You don't say. As a young artist and young human the Biebs has gone through many phases (as have most people) and his tours have expressed that. In the first tour the pop star was easing into hip hop territory with guests Sean Kingston and Jessica Farrell –– he dressed in all white and his wardrobe changes included a purple hoodie as a way of riding the pop/hip-hop wave. On his next tour, Believe (if we can manage to ignore the whole "Bieber vomiting on stage" thing), Bieber's set-up served to prove that the pop star was performing hard to be memorable to his fans as he opened the evenings in a descent from the "heavens" while rocking angel wings. With all their glitz and glam these shows were certainly memorable, and yet Bieber keeps growing and developing –– and this round, it seems, he chose to focus much more on showcasing his varying skills. In fact, by flipping through the avalanche of photos and videos of Bieber's Purpose tour you can notice a significant trend: '90s rocker grunge, complete with Bieber playing his own instruments and rocking flannel ensembles.

1. The Merch Is Clearly Metallica-Themed

If you just ignore the typo in the world "purpose," this is a pretty cool shirt.

3. He Played His Own Instrument

Nothing is more rock n' roll than playing your own instruments.

4. His Hair Is Getting Longer And Longer

See that tiny ponytail? At this rate, by the end of the tour, he's going to have long flowing locks, perfect for headbanging during a guitar solo.

6. He Shared A New Song That Hit You Right In The Feels

With acoustic guitar at his side, Bieber shared a song called "Insecurities." Songs that are super emotional and stripped down? Hey, clear homage to Kurt Cobain, I see you.

I don't mean to focus too heavily on hair here, but it is a big part of the look. And bleached blond hair for guys is definitely super '90s.

As far as phases go, this one isn't the worst one Bieber has picked up. I salute the singer for his '90s grunge-esque tour and can't wait for the next tour –– because it's pretty clear it will be a whole new Bieber once again.

More like this
You’ve Been Singing The Wrong Lyrics To “All I Want For Christmas Is You”
By Sam Ramsden
The 'Kenan & Kel' Reunion On 'SNL' Took A Dramatic Turn, Thanks To Keke Palmer
By Brad Witter
Paris Hilton’s Tweet About The 2006 “Holy Trinity” Photo Will Make You Feel Old
By Marina Watts
The First Trailer For 'That '90s Show' Includes So Many Nods To The Original Series
By Jack Irvin, Alyssa Lapid and Grace Wehniainen
Get Even More From Bustle — Sign Up For The Newsletter