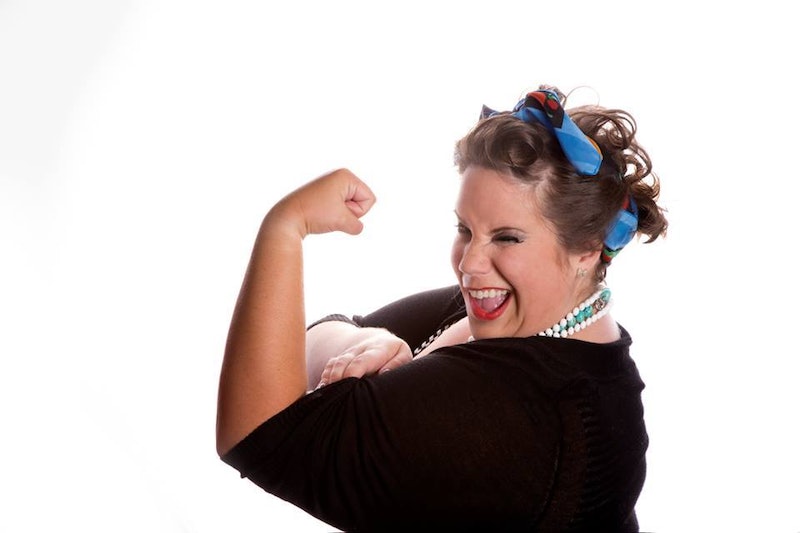 I'm digging this "Fat Girl Dancing" video series from blogger and radio producer Whitney Thore, whose No Shame Body Campaign advocates for self love and shows that you don't need to look like a Beyonce backup girl to move like a Beyonce backup girl. Thore said she's been dancing since she was four years old, but stopped in college after putting on weight due to Polycystic Ovarian Syndrome. But with encouragement from colleague Jared Pike — who's now Thore's sometimes dance partner — Thore started posting the awesome dance videos to YouTube.

"I am fully dedicated to supporting fellow women in ridding ourselves of shame, and showing that I am NOT ashamed of my body," Thore told HuffPost. She launched the campaign in response to "fat shaming" she got when posting boudoir shoot photos to her personal blog. Thore writes on the No Body Shame Campaign website:

I am learning to practice aggressive self-love. I've lived my life as a 130-pound woman and as a 350-pound woman in North America, in Europe, and in Asia. Cultural norms, societal pressures, and the whims of the fashion industry do not define my worth as woman or a human being. My intelligence, personality, talents, and contributions do not fluctuate with the numbers on a scale ... No matter WHAT you're struggling with, embrace what you have to offer, love yourself right this minute and start affecting positive change for yourself and others. No excuses. No shame.

Here's an example of how Thore is embracing her dancing skills no matter her weight.

So far, people have been into it.

Here's the dance video Thore made in response: