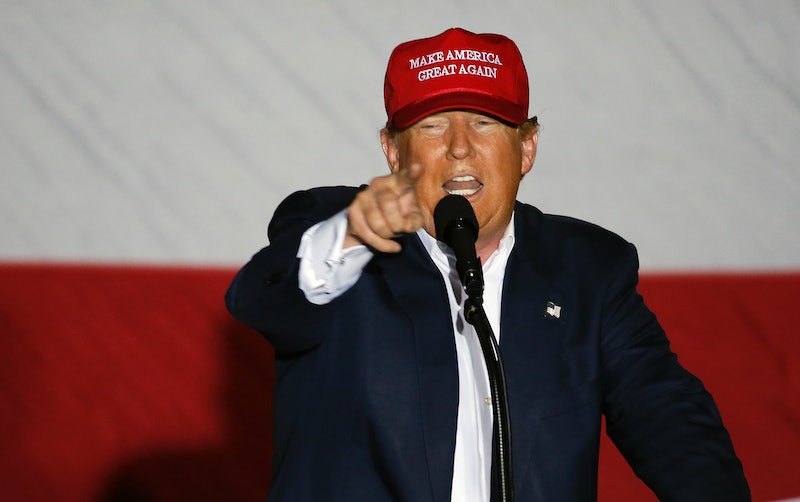 In a new anti-Trump ad, the real estate mogul's words come back to bite him. In what could easily become a tactic for any Democrat going up against the Republican candidate, women are shown repeating some of Donald Trump's most offensive comments and insults towards women. The ones that aren't bleeped out run the gamut of insulting and offensive. "Fat pig," "bimbo," and "dog," made the cut, as did his insults aimed at Megyn Kelly. Not fun to watch — but extremely effective in showing why you wouldn't want to vote for him.

That's what the super PAC that created the ad is hoping for. Our Principles PAC, according to FactCheck.org, an organization formed by veterans of the Mitt Romney and Jeb Bush campaigns to stop Trump, created the video. It runs about a minute and has racked up nearly 800,000 YouTube views since it was posted Monday. It could not have been hard to make, as all of the statements but one come from 2015 or 2016 — and very little research is needed to find Trump being offensive to women.

Some of the worst include:

— It really doesn't matter what they write, as long as you've got a young and beautiful piece of ass.

Attacking Trump's stances on women is a smart move, as Jeff Stein for Vox pointed out. In 2012, Romney took a lot of grief for his "binder full of women" gaffe — and he was trying to point out that hiring women was important. He lost women by 12 points. Clinton has been shown to be up by as much as 21 points against Trump. The New York Times reported that Trump's comments on women would be one of the main ways the Clinton campaign will target him in November.

This is not the first ad the Our Principles PAC has created. One of the others focused on the violence emanating from the Trump campaign, particularly the campaign manager that was accused of grabbing a female Breitbart reporter. That incident led to some writers and editors leaving the site in protest of how the reporter was treated. Another focuses on outsourcing. One focuses on former statements that make him look further left — even self-identifying as a Democrat.

That might make him look bad among Republicans, but this ad should speak to any American woman, and any man who knows and cares about them.