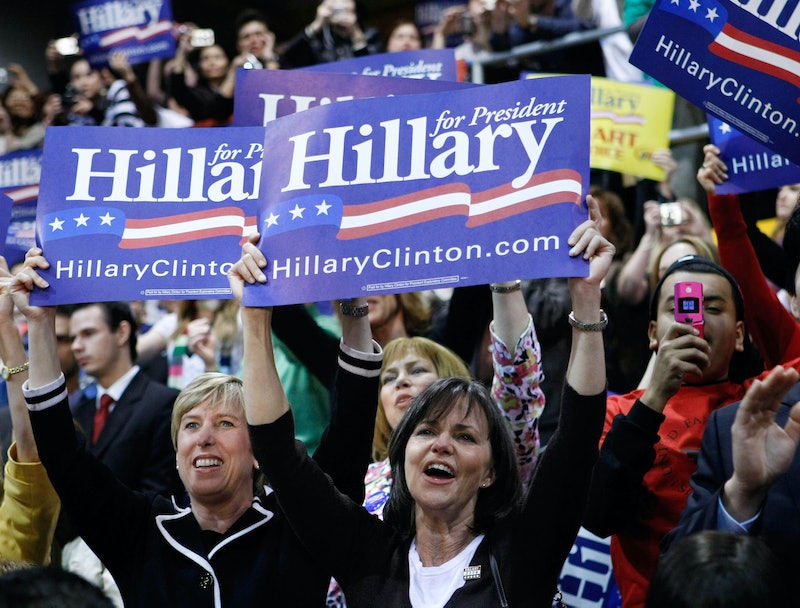 Some celebrities choose to keep their political preferences private — Sally Field has never fallen into that camp. In 2007, she used her Emmy Award acceptance speech to state her unhappiness with the ongoing wars; in 2008, she campaigned for then-nominee Hillary Clinton, having teamed up with her for the feminist non-profit Vital Voices; and in 2012, she won a major award from the Human Rights Campaign due to her activism for gay rights. And this year, Field is back supporting Clinton once again, speaking openly and frequently about why she thinks the Democratic candidate is the right choice for President.

Field credits Clinton's attitude towards the criticism she's faced throughout her career as one of the main reasons the candidate has her support. "We've all watched over the years how she takes adversity and learns from it, how she's strengthened by it, because she's faces it front-on, even when the adversity is so terribly unfounded," the actor says.

In a recent interview with TIME, Field explained that filming and promotion for her new film Hello, My Name Is Doris has kept her from being out on the campaign trail with Clinton like she did in '08. Yet despite not being able to physically stand with the candidate this time around, Field has made her support for Clinton — as well as her criticism of Bernie Sanders — widely known, and when she talks about the former First Lady possibly earning the nomination, the urgency in her voice is clear. The actor is aware of Clinton's flaws as a candidate, and doesn't sugarcoat them: "She'll talk about how she doesn't present herself well — she's better at campaigning for somebody else."

But those imperfections, she says, actually turn into some of Clinton's biggest strengths. "I have watched her try to learn things that she felt were her weak sides," says Field. "She takes everything very, very seriously." One of the biggest criticisms the candidate is currently facing, that she's not as enthusiastic or as able to encourage support as Sanders, is actually "incredibly refreshing," Field says, adding, "She has a kind of shy quality about her, a kind of modest quality about her. She's not an ebullient person who wants all eyes on her all the time."

Yet at the same time, the actor says, Clinton "is so personable, she's somebody you could be best friends with. ... You can talk to her, and there's really somebody there."

Of course, it comes down not just to a candidate's likability, but their intellect, determination, and ability to govern — all things that Field insists Clinton has aplenty. "You see her stand up in the world arena with such dignity and such knowledge," the star says. "She is incredibly learned."

So, she adds, "I would like very much [for Hillary Clinton] to be our next president of the United States, and I will do whatever I can to make that happen. It's bound to happen, at this point. It must."

More like this
10 Times Diana & Meghan Spoke Similarly On The Royal Family
By Sophie McEvoy
How To Support Gun Control Reform Right Now
By Morgan Brinlee and Carolyn Steber
BTS Is Visiting The White House To Discuss Anti-Asian Hate Crimes With President Joe Biden
By Jake Viswanath
Yes, Billboard Queen Angelyne Really Ran For Governor Of California
By Brad Witter
Get Even More From Bustle — Sign Up For The Newsletter