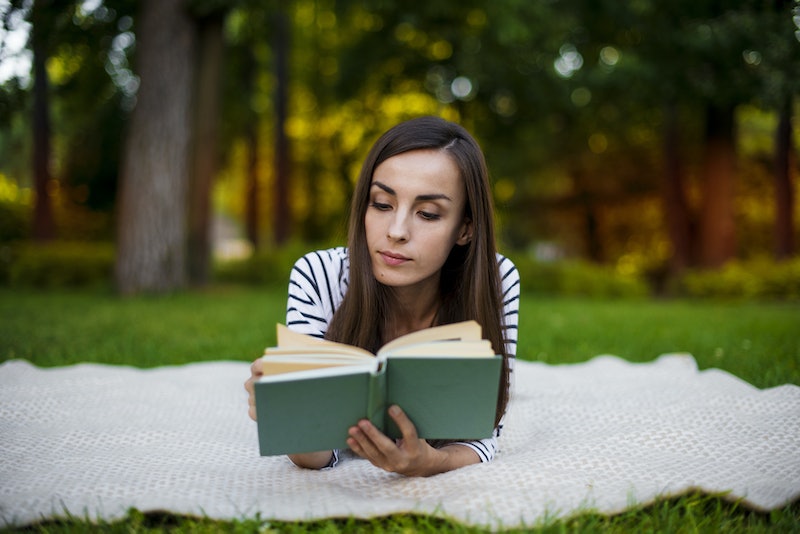 This April, poets and poetry lovers everywhere will join together in cracking open their favorite notebooks and anthologies in celebration of the 20th anniversary of National Poetry Month — a yearly, month-long appreciation of poetry and the amazing writers who compose it. In honor of the month of festivities, I’ve compiled some of my favorite classic poems to reread for National Poetry Month, just for you. Hopefully, they are (or will become!) a few of your favorites as well.

In the two decades since the Academy of American Poets inaugurated National Poetry Month, in 1996, it has become the largest literary celebration in the world, complete with public readings, activities for students, and a calendar of daily ways to celebrate poetry all month long (my personal favorite is Poem In Your Pocket Day — which, in my life, is sometimes every day.) The celebration even has its own hashtag (like you’re surprised) so be sure to head over to Twitter during the month of April to mark all your National Poetry Month tweets with #npm16, and learn what poetic tweeters all over the world are doing as well.

Here are 14 classic poems to reread for National Poetry Month. Now get to reading!

1. Stopping by Woods on a Snowy Evening by Robert Frost

Whose woods these are I think I know. His house is in the village though; He will not see me stopping here To watch his woods fill up with snow. My little horse must think it queer To stop without a farmhouse near Between the woods and frozen lake The darkest evening of the year. He gives his harness bells a shake To ask if there is some mistake. The only other sound’s the sweep Of easy wind and downy flake. The woods are lovely, dark and deep, But I have promises to keep, And miles to go before I sleep, And miles to go before I sleep.

— Robert Frost, Stopping by Woods on a Snowy Evening

3. “Hope” is the thing with feathers by Emily Dickinson

“Hope” is the thing with feathers -That perches in the soul - And sings the tune without the words -And never stops - at all -And sweetest - in the Gale - is heard -And sore must be the storm -That could abash the little BirdThat kept so many warm -I’ve heard it in the chillest land -And on the strangest Sea -Yet - never - in Extremity,It asked a crumb - of me.

— Emily Dickinson, “Hope” is the thing with feathers

Nobody in the lane, and nothing, nothing but blackberries, Blackberries on either side, though on the right mainly,A blackberry alley, going down in hooks, and a seaSomewhere at the end of it, heaving. BlackberriesBig as the ball of my thumb, and dumb as eyesEbon in the hedges, fatWith blue-red juices. These they squander on my fingers.I had not asked for such a blood sisterhood; they must love me.They accommodate themselves to my milk bottle, flattening their sides.Overhead go the choughs in black, cacophonous flocks—Bits of burnt paper wheeling in a blown sky.Theirs is the only voice, protesting, protesting.I do not think the sea will appear at all.The high, green meadows are glowing, as if lit from within.I come to one bush of berries so ripe it is a bush of flies,Hanging their bluegreen bellies and their wing panes in a Chinese screen.The honey-feast of the berries has stunned them; they believe in heaven. One more hook, and the berries and bushes end.The only thing to come now is the sea.From between two hills a sudden wind funnels at me, Slapping its phantom laundry in my face.These hills are too green and sweet to have tasted salt.I follow the sheep path between them. A last hook brings me To the hills’ northern face, and the face is orange rock That looks out on nothing, nothing but a great space Of white and pewter lights, and a din like silversmiths Beating and beating at an intractable metal.

I celebrate myself, and sing myself,And what I assume you shall assume,For every atom belonging to me as good belongs to you.I loafe and invite my soul,I lean and loafe at my ease observing a spear of summer grass.My tongue, every atom of my blood, form’d from this soil, this air,Born here of parents born here from parents the same, and their parents the same,I, now thirty-seven years old in perfect health begin,Hoping to cease not till death.Creeds and schools in abeyance,Retiring back a while sufficed at what they are, but never forgotten,I harbor for good or bad, I permit to speak at every hazard,Nature without check with original energy.

— Walt Whitman, Song of Myself

i carry your heart with me (i carry it inmy heart) i am never without it (anywherei go you go, my dear; and whatever is doneby only me is your doing, my darling)i fearno fate (for you are my fate, my sweet) i wantno world (for beautiful you are my world, my true)and it’s you are whatever a moon has always meantand whatever a sun will always sing is youhere is the deepest secret nobody knows(here is the root of the root and the bud of the budand the sky of the sky of a tree called life; which growshigher than soul can hope or mind can hide)and this is the wonder that's keeping the stars aparti carry your heart (i carry it in my heart)i carry your heart (i carry it in my heart)”

8. The Charge of the Light Brigade by Lord Alfred Tennyson

— Lord Alfred Tennyson, The Charge of the Light Brigade

For Carl SolomonI saw the best minds of my generation destroyed by madness,starving hysterical naked,dragging themselves through the negro streets at dawn lookingfor an angry fix,angelheaded hipsters burning for the ancient heavenlyconnection to the starry dynamo in the machinery of night,who poverty and tatters and hollow-eyed and high sat up smokingin the supernatural darkness of cold-water flats floatingacross the tops of cities contemplating jazz,who bared their brains to Heaven under the El and sawMohammedan angels staggering on tenement roofsilluminated,who passed through universities with radiant cool eyeshallucinating Arkansas and Blake-light tragedy among thescholars of war,who were expelled from the academies for crazy & publishingobscene odes on the windows of the skull,who cowered in unshaven rooms in underwear, burning theirmoney in wastebaskets and listening to the Terror throughthe wall…

11. “I think I should have loved you presently” by Edna St. Vincent Millay

I think I should have loved you presently,And given in earnest words I flung in jest;And lifted honest eyes for you to see,And caught your hand against my cheek and breast;And all my pretty follies flung asideThat won you to me, and beneath your gaze,Naked of reticence and shorn of pride,Spread like a chart my little wicked ways.I, that had been to you, had you remained,But one more waking from a recurrent dream,Cherish no less the certain stakes I gained,And walk your memory’s halls, austere, supreme,A ghost in marble of a girl you knewWho would have loved you in a day or two.

— Edna St. Vincent Millay, " I think I should have loved you presently"

12. I Wandered Lonely as a Cloud by William Wordsworth

I wandered lonely as a cloudThat floats on high o'er vales and hills,When all at once I saw a crowd,A host, of golden daffodils;Beside the lake, beneath the trees,Fluttering and dancing in the breeze.Continuous as the stars that shineAnd twinkle on the milky way,They stretched in never-ending lineAlong the margin of a bay:Ten thousand saw I at a glance,Tossing their heads in sprightly dance.The waves beside them danced; but theyOut-did the sparkling waves in glee:A poet could not but be gay,In such a jocund company:I gazed—and gazed—but little thoughtWhat wealth the show to me had brought:For oft, when on my couch I lieIn vacant or in pensive mood,They flash upon that inward eyeWhich is the bliss of solitude;And then my heart with pleasure fills,And dances with the daffodils.

— William Wordsworth, I Wandered Lonely as a Cloud

Deep in the shady sadness of a valeFar sunken from the healthy breath of morn,Far from the fiery noon, and eve's one star,Sat gray-hair'd Saturn, quiet as a stone,Still as the silence round about his lair;Forest on forest hung about his headLike cloud on cloud. No stir of air was there,Not so much life as on a summer's dayRobs not one light seed from the feather'd grass,But where the dead leaf fell, there did it rest.A stream went voiceless by, still deadened moreBy reason of his fallen divinitySpreading a shade: the Naiad 'mid her reedsPress'd her cold finger closer to her lips.

14. What Kind of Times Are These by Adrienne Rich

There's a place between two stands of trees where the grass grows uphilland the old revolutionary road breaks off into shadowsnear a meeting-house abandoned by the persecutedwho disappeared into those shadows.I've walked there picking mushrooms at the edge of dread, but don't be fooledthis isn't a Russian poem, this is not somewhere else but here,our country moving closer to its own truth and dread,its own ways of making people disappear.I won't tell you where the place is, the dark mesh of the woodsmeeting the unmarked strip of light—ghost-ridden crossroads, leafmold paradise:I know already who wants to buy it, sell it, make it disappear.And I won't tell you where it is, so why do I tell youanything? Because you still listen, because in times like theseto have you listen at all, it's necessaryto talk about trees.

— Adrienne Rich, What Kind of Times Are These

More like this
All The Most Stylish Winter Wardrobe Staples You Can Buy On Walmart.com
By Jessie Quinn
The 'Firefly Lane' Book Ending Teases Way More Tears To Come In 2023
By K.W. Colyard
Allie Rowbottom Will Have Her Feminism With A Side of Botox
By Samantha Leach
'Bridgerton' S3 Teases Exciting Social Season For Penelope Featherington
By Bustle
Get Even More From Bustle — Sign Up For The Newsletter