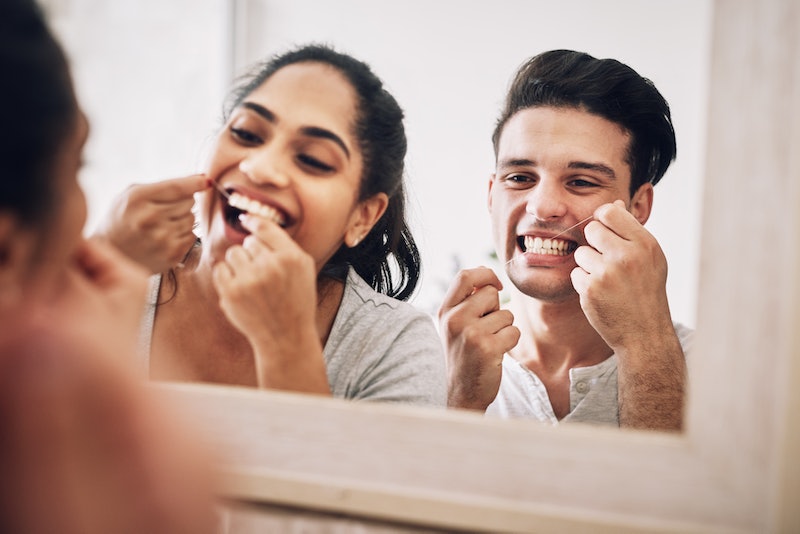 Everyone hates flossing. It's not thing against you, floss, it's just us. We're lazy. Between bathing, brushing our teeth, washing our face, moisturizing, doing our hair — there's just not a lot of time or energy left for flossing. Not to mention, flossing is far from fun or enjoyable. And for many people, it can leave you with bloody, sore gums. So yeah, when we're trying to cut corners in the bathroom, flossing is first to go.

Despite our laziness, it turns out flossing is just as important as brushing. And not only that, but flossing after brushing is not necessarily the best order. Flossing frees all sorts of build-up and bacteria from the spaces between your teeth. If you don't brush and rinse afterward, the particles are just hanging out in your mouth all night. So it's suggested that not only do you make flossing just as much of a priority as brushing, but you should also move flossing to the front of your routine.

While not all dentists agree that flossing first is the best policy, they do agree that if you're more likely to floss if you get in the habit of doing it first, it's definitely best to make flossing your first step on your oral care routine. The following are five other mistakes you might be making:

Using The Same Piece Of Floss

If you stick the same inch of string in-between each of your teeth, you're only moving bacteria from one tooth to the next. Slide down an inch on the floss as you change teeth to stop the transfer of bacteria.

Forgetting Those Guys In The Back

Though your far gums might be more spaciously laid out, they still need some love from the floss fairy. Most people don't bother with them because they're hard to reach, but they're just as important.

Using Anything But Floss

Some people think that by using a toothpick after meals, they eliminate the need for floss. Unfortunately, it's not true. Toothpicks can be helpful in eliminating trapped food or even loosening plaque, but floss is needed to get all the way in-between teeth. You shouldn't rely on anything other than floss to floss.

Giving Up Too Soon

You should spend more than a few seconds on each tooth. Make sure you hit it with the floss from both sides and clear away as much plaque as possible before moving on to the next tooth.

Stopping At The Sight Of Blood

Sure, if your mouth is bleeding profusely you should stop (and see a dentist ASAP). But if there's a tiny bit of blood, keep going. The longer you go without properly flossing, the worse your gums will bleed.