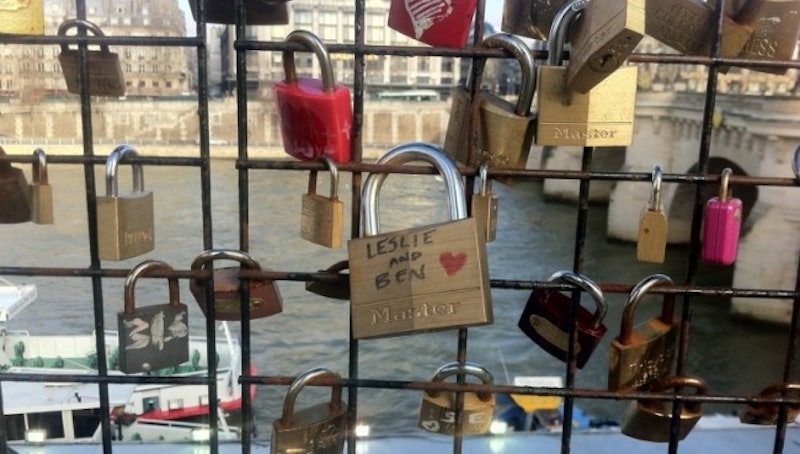 Seriously though. SERIOUSLY. What kind of crazy, insane, psychotic monster would do something like this? Is nothing sacred? Can we immediately unleash a manhunt to find whoever did this and ensure they're punished and never allowed to step into the town of Pawnee, Indiana ever in their lives? CAN WE? Because this is unforgivable: According to a user on Tumblr, someone has stolen Ben and Leslie's love lock from this season of Parks & Recreation , which was previously hanging just off of Paris' Pont Neuf bridge in over the Seine. As the user explained on their Tumblr page:

So I was in Paris the other day and as the Parks & Rec dork that I am, I set on a mission to find the Ben & Leslie lock from the Paris episode (see top left photo).

Following the reddit directions, I found the exact location, checked that all the other locks around it matched.. only to find the actual lock gone. Someone has clearly snipped off the metal fence to slide the lock off. I was super mad and super sad all at once.

Whoever you are, super hardcore Parks fan, you kinda suck.

If you remember from the 100th episode of Parks, Ben surprised Leslie with a trip to Paris, and they attached a love lock to the bridge. The user also attached a photo of the lock's former home, in which the cut fence is visible.

WHO WOULD DO SOMETHING LIKE THIS? You are a terrible person, whoever you are. Leslie Knope will never forgive you.