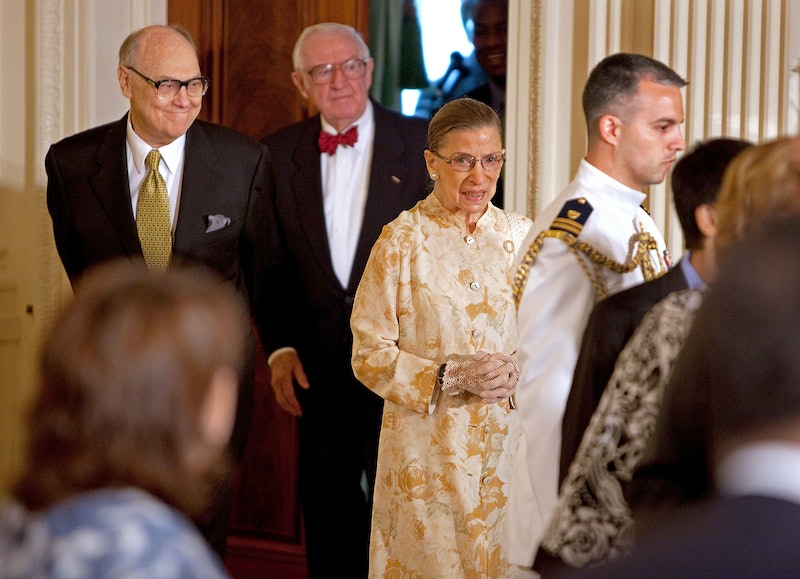 Supreme Court Justice Ruth Bader Ginsburg celebrates her 83rd birthday March 15, 2016, and the world of American feminists celebrates with her. Ginsburg has become a hero to many during her years on the Supreme Court as a champion for women's rights, marriage equality, and common sense language in the American legal system so as not to clog up the clarity of decisions passed down by the Court with legal jargon and erroneous Latin — and I've got the Ruth Bader Ginsburg quotes to prove it.

Ginsburg is kind of like a real life Professor McGonagall — stern and fair, with a knack for doing the right thing, and she wears those robes like the boss legal wizard she is. Born Ruth Joan Bader in a working-class Brooklyn neighborhood smack dab in the middle of the Great Depression, her mother instilled in her a deep reverence for the value of reading and education. Fast-forward four decades, and Ginsburg was already the first female tenured professor at Columbia University.

Through her hard work and defiance of society's preconceived notions about a "woman's place," Justice Ginsburg has cemented herself as a role model for every little girl out there who identifies with another Harry Potter heroine — Hermione Granger. Another thing that makes all of her accomplishments, common sense, and razor sharp wit well into her 80s even more wonderful is the visual poetry of a tiny, Jewish woman, only about five feet tall, as a veritable super hero. Notorious RBG is still the only Supreme Court Justice to be anointed with a rap name by an enthusiastic throng of devotees. Happy birthday, Justice Ginsburg! I hope your cake is as good as your oral arguments from last week.

1. On her feelings about marriage equality

“People who love each other and want to live together should be able to enjoy the blessings and the strife in the marriage relationship.”

2. And her thoughts on Citizens United

3. And some wisdom on keeping things in perspective

“You can’t have it all at once. Over my lifespan, I think I have had it all. But in different periods of time, things were rough.”

4. On laws that supposedly "protect" women

5. On who to call if you need a Notorious RBG t-shirt

"I think a law clerk told me about this Tumblr and also explained to me what Notorious RBG was a parody on. And now my grandchildren love it and I try to keep abreast of the latest that’s on the Tumblr. … [I]n fact I think I gave you a Notorious RBG [T-shirts]. I have quite a large supply."

6. And about effecting meaningful change

“If you’re going to change things, you have to be with the people who hold the levers.”

"My mother told me two things constantly. One was to be a lady, and the other was to be independent. The study of law was unusual for women of my generation. For most girls growing up in the '40s, the most important degree was not your B.A., but your M.R.S."

8. And what law school was like as one of a few women

“Every time you went to answer a question, you were answering for your entire sex. It may not have been true, but certainly you felt that way. You were different and the object of curiosity.”

9. On how jargon shouldn't be the focus of legal language

“I think that law should be a literary profession, and the best legal practitioners regard law as an art as well as a craft.”

So, if you need a reason to celebrate today, celebrate the birthday of the baddest Brooklyn Justice around — the one and only Ruth Bader Ginsburg.

More like this
5 Ways To Stand In Solidarity With Women In America From The UK
By Sophie McEvoy
How To Fight For Reproductive Rights, Based On How Much Time You Have
By Courtney Young
How Getting An Abortion Has Changed From The ’60s Through Today
By Amanda Chatel
16 Novels That Paint A Realistic Portrait Of Abortion
By K.W. Colyard
Get Even More From Bustle — Sign Up For The Newsletter