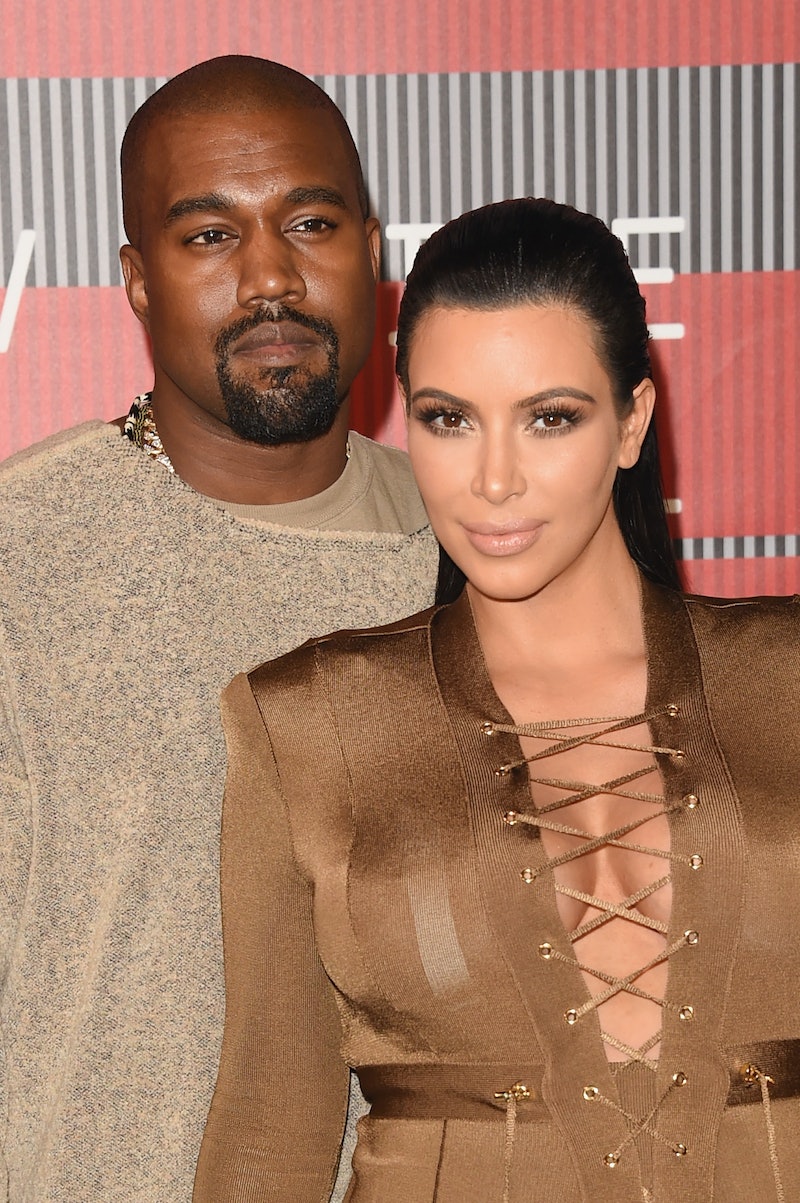 The life of Saint West is something that has emotionally affected me since he first entered this world last year. After all the anticipation surrounding Kim Kardashian's pregnancy, it seemed like a crime that she waited so long to share his tiny, adorable face with the rest of us. But eventually, the big reveal came, and last week, Kardashian shared what is probably the cutest picture ever of him on Instagram. And now that we've seen a few photos, there's a new question on my mind: Does Saint look more like Kim Kardashian or Kanye West?

It's kind of a ridiculous question to begin with, because they're his parents — of course, he looks like both of them. And he especially looks like his big sister, North, when she was his age. Looking at him, it's easy to see the family resemblance that runs through the entire oversized Kardashian brood, but some of West's features are there, too. So who will he favor as he gets older? There's only one way to find out, and it's called face morphing.

For this highly scientific investigation, I inserted the below photo of Saint plus a photo of his mom, then his dad into the morphing tool on three different websites. Whoever has the most end results that look more like the original photo is the winner, because that is how you figure these things out when you don't have access to a DNA lab because you're actually a regular 26-year-old girl who cares more about this family than is probably normal or healthy.

So who will it be, Kardashian or West? Drumroll, please...

I don't think I need to explain to you why West wins this round, but I will anyway. First of all, there's something about the Kardashian/Saint hybrid that makes me think that child would cut off all her hair in her sleep and then deny he ever did anything. Second of all, the West version looks way more like Saint, especially after he grows a little more hair.

Aside from the obvious — that West and Kardashian would never be so tasteless as to buy that awful dog hat and put it on their baby — Kardashian's version somehow has red hair and razor sharp teeth, which clearly none of Saint's family members do. For the Baby Maker results, I have to go with West once again, because his baby actually does kind of look like him.

Morph Thing was clearly the most realistic representation, with no crazy hats or teeth or scary faces. The top baby is West, and the bottom baby is Kardashian. And while both of these babies are beautiful, but once again, it has to go to West. Also, is it just me, or does the baby below also look a little bit like Beyoncé? Just saying.

Saint West is the spitting image of his dad — more than his mom, anyway, according to this very scientific data I have collected. And really, since we get to enjoy the adorable photos of Saint for years to come, aren't we all the winner? It will be fun to see if this holds true as he gets older. Maybe he'll have a prolific Twitter presence just like his pops?