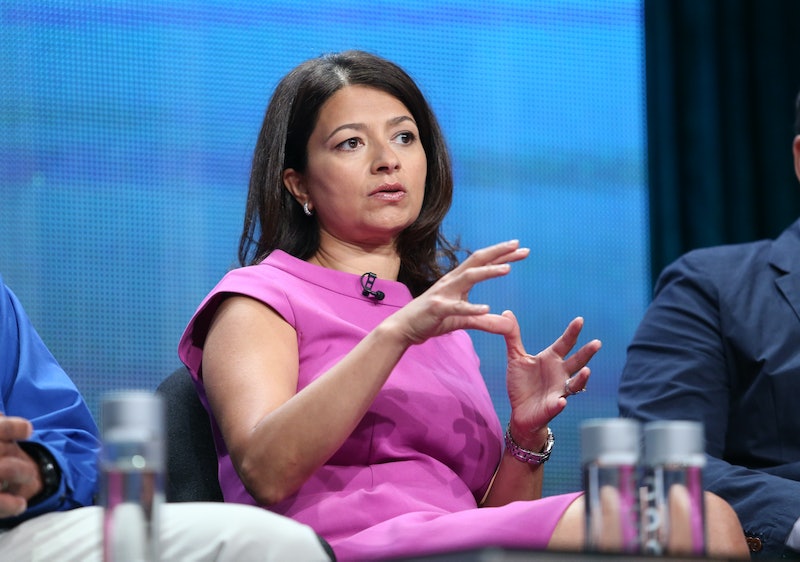 It's 2016, yet women and minorities are still underrepresented at all levels of American politics. Arguably, few know the decades-long struggle for equal representation more than Sayu Bhojwani, who is training tomorrow's political leaders. Bhojwani is a passionate and tireless advocate for “new Americans” — immigrants and other first-generation Americans — and shows up to work every day ready to work for a more inclusive democracy.

In her Twitter bio, Bhojwani identifies herself as a “restless citizen," which is evident in the number of organizations she has founded, including the South Asian Youth Association (SAYA!) and the New American Leaders Project (NALP). However, Bhojwani is becoming less restless in finding new work, as she has changed the lives of many underrepresented people over the last six years since she launched NALP. Bhojwani says it’s the first time in her life she’s not looking for a new problem to solve or organization to start.

Bhojwani travels between California, Michigan, Arizona, and New York to connect with immigrant youth and inspire them to run for political office through NALP. She has dedicated her life to ensuring that these people not only have a voice, but that they feel comfortable using it, which she says will be achieved when they can see themselves reflected in their local and state political officials. "It matters that these conversations are happening, but until there’s real policy change, and system change, and resources, it’s just a polite conversation,” Bhojwani says.

Since her family’s move to Belize at age four, Bhojwani has experienced her entire life through an immigrant’s lens. Her close high school friends are still based in Belize, her strong work relationships in London, and she has lived in New York for three decades. She says that when she became Mayor Michael Bloomberg’s Commissioner of Immigrant Affairs in 2002, she still thought of herself as a little girl from Belize, and that her immigrant identity was at the forefront of her life.

“It’s very hard for me to separate that from my own journey as an immigrant, because I had been in this country for 17 years before I became a citizen in 2000,” Bhojwani says. “In 2001, I voted for the first time, and six months later I became Commissioner of Immigrant Affairs.”

I think everything in my life has prepared me to be in this moment.

Her talents were highlighted in the New York Times “Public Lives” section, which used to profile individuals around the city who were making a difference in the lives of others. Bhojwani was in her early 30s and was feeling like she had finally made it in the Big Apple. When her profile was published in The Times, she says she was “floating on Cloud Nine” for half the day. However, her elation came to an end when, on her way to a meeting that afternoon, she walked past a man on the sidewalk who stopped to ask her if she spoke English.

“In that moment, everything that I felt just deflated. It made me re-realize that no matter how much I accomplish as an individual, until everyone who looks like me was seen as speaking English, belonging here, and having rights, then my individual accomplishments really didn’t mean anything."

Although Bhojwani admits she still thinks about this exchange today, she prefers to stay optimistic and put others — literally entire communities — before herself. Through NALP, she recruits and trains diverse individuals to serve their communities (and eventually D.C.) by pursuing political positions. Through NALP and SAYA!, Bhojwani has worked with immigrant youth who have experienced similar forms of discrimination.

Her work has led her to her current role as founder and CEO of NALP, which allows her to help turn today’s immigrants into tomorrow’s leaders. NALP has two main goals: 1) To have more local and state elected officials who understand immigrant issues and can deal with their everyday struggles, and 2) Build a pipeline so that Congress will include more “new Americans” in 10 to 20 years.

The idea for NALP came to Bhojwani in 2010, when she realized that things were not going to progress on immigration reform after anti-immigration laws like Arizona’s SB-1070 were passed.

Despite her now-thriving activism, Bhojwani is humble about her beginnings. “It was torture,” she says of turning her ideas into a running organization. “Starting any kind of organization is hard, and a nonprofit is even harder, especially two years after the fiscal crisis." And creating a pan-ethnic organization wasn't easy, especially when working to reform a national conversation which likes to separate ethnicities rather than consider them together.

Bhojwani’s tireless dedication to creating a new generation of political leaders helped her overcome these difficulties. Together with her staff of 10, she has grown NALP to include 400 alumni across the country. Each year, NALP selects as many as 28 individuals for their initial training, in which they spend a weekend discussing their personal motivations for running for public office. From that group, Bhojwani and her team select as many as five Fellows — individuals whom they will train and help run for public office that year.

Bhojwani’s positive spirit and relentless attitude is clear in the NALP alumni who are running for office — like the one running for the Canton Library Board in Michigan who was previously on the no-fly list due to discrimination. “It’s interesting to me to see people who could be very disillusioned, but are actually so committed to American democracy they are deciding to run,” she says. This year, there are 20 NALP alumni running for public office, and Bhojwani says she thinks about them every day, and wants them to come out feeling strong and empowered.

After fighting for immigrants’ rights and working to create the next generation of political leaders, Bhojwani has made a significant difference all over the country. When she’s not in meetings brainstorming how to expand NALP programming, Bhojwani can be found traveling between four different states in three different time zones to attend training sessions. “We realize in the training that it’s not the science that people don’t understand; it’s just that they don’t see themselves. We help them to see themselves the way that we see them: as the leaders that they actually are."

Bhojwani has been so inspired by the stories and people she has encountered through her life’s work that she is currently writing a book about them. Besides that, though, she has no plans of leaving NALP or changing her course of work any time soon. “I think it’s a sign of how much I love what I do that I don’t know what I’m going to do next,” Bhojwani says. “I think everything in my life has prepared me to be in this moment. I definitely think this is my life’s work — making sure all of our communities find a place at the policy-making table.”