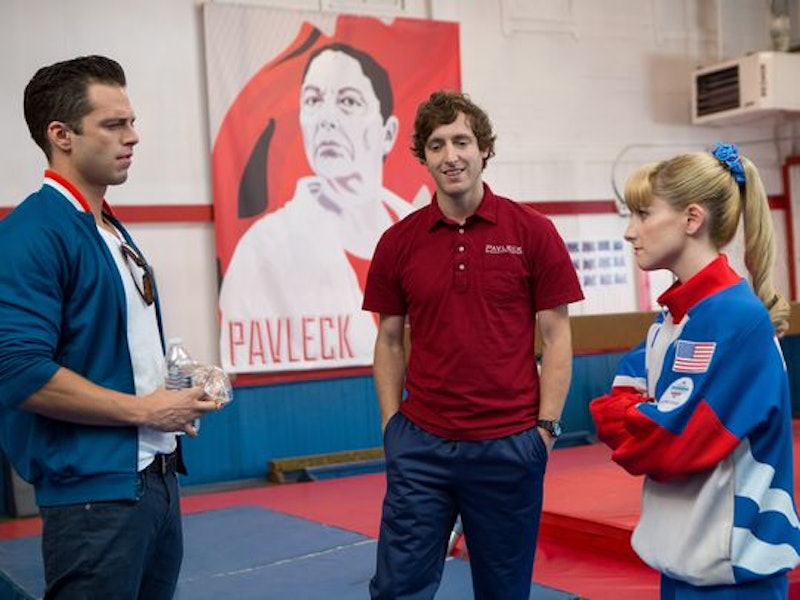 When Captain America star Sebastian Stan signed on for the indie comedy The Bronze , he knew he wanted his character, an former Olympic gymnast coach, to be a total douchebag. "I bet he's the guy who sits in the waiting room and is like, 'I wonder if I'm getting enough vitamin D, I should probably look that up,'" the 33-year-old says. "He's such a narcissist. He's also just a raging, arrogant, dick."

Stan, who somehow can't help but be likable in the role — even while he's hurling insults — plays the part with a strange believability. The comedic role is a welcome change from the eyeliner and brooding moments audiences are used to seeing when Stan portrays Bucky Barnes in Marvel's Captain America franchise. "I looked at all the Olympic teams from present to 1987. That's where the jelled hair came from — the half a bottle of jell I would use daily. I saw somebody who had perfectly slick, wet, always-frozen-in-time hair," Stan recalls. "I just tried to know enough about the world so that if need be I could reference some weigh protein I was drinking or some new tanner I was wearing."

His on-screen opposite is Twitchy, a goofy gym employee with low-self esteem played by Thomas Middleditch. Both men vy for the attention of Melissa Rauch's Hope Ann Gregory, a one time Olympic bronze medalist. "You get a lot of comedy scripts that are not funny," Middleditch, who stars on HBO's Silicon Valley, says. "But this one was. All the characters have a darkness to them, they are all deeply flawed. There's comedy in tragedy. It's much funnier to see people fail or struggle."

In terms of his own shot at an Olympic medal, Middleditch would take home the gold. "I would compete in something to make my country of Canada proud — center-forward on the Canadian national hockey team," he jokes, then reconsiders his sport: "I think it's called the decathlon, where you cross country ski then at every station you take out a rifle and you target practice. Then you put the rifle back on and ski again. You're battling with the cardio, because you have to shoot after you've just been huffing it for a mile. That's a fun one. They don't show a lot of the more alternative sports in [America]. In Canada we get it all. It's round the clock everything!

Watch Middleditch and Stan battle it out when The Bronze hits theaters Friday, March 18.