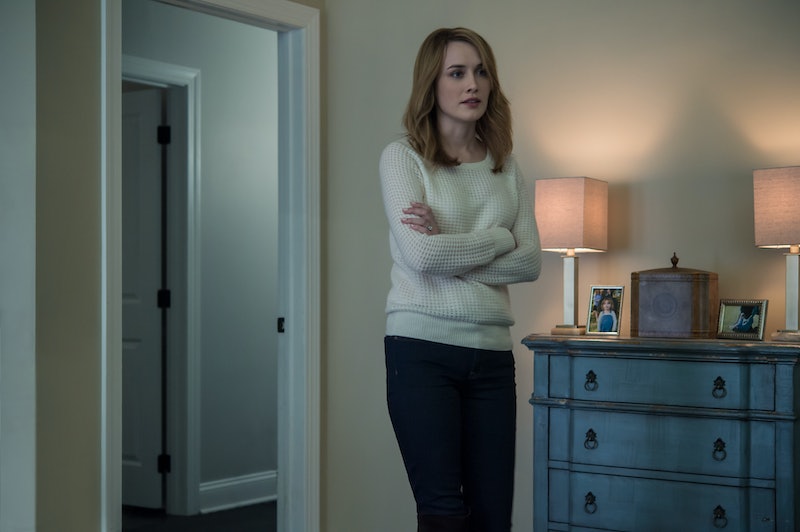 Much like the real world, House of Cards is a bit of a mixed bag when it comes to feminism. One minute there are multiple female candidates for office, and the other a women is being stalked and killed for revenge. However, Claire Underwood has always been one of the most interesting and feminist characters on television, and Hannah and Claire's scene in Episode 11 of House of Cards Season 4 was a major feminist moment for the series.

This is the first major interaction between the First Lady and the Governor's Wife in the series, and hopefully not their last. The ways that Will Conway and Frank Underwood are similar were revealed at a slow burn, and I think the same is true for these two. Hannah starts with what could be a problematic compliment — "I don't know how you do it," but she's talking about running for office while serving as First Lady.

Hannah then lightly addresses one of Claire's critiques of their campaign (specifically the Conways' social media presence) by saying that when the election is over, "I'd like to be able to do more than update my Instagram." Claire begins to apologize for her comments, but Hannah shakes it off. She's not offended. It's politics. It's a very sincere and small moment that makes the scene work. These two aren't really rivals. They don't need to be "catty" or competitive.

However, the Feminist kicker is the end of their scene. When the First Lady comments on how cute the Conway son is, Hannah asks Claire if she ever regrets not having children. Hannah immediately rescinds the question — it's too personal for someone with that high status, and even more so considering that her abortions have been made public. However, Claire responds with something more simple. "Do you ever regret having them?"

What I like about this moment is that it serves multiple purposes. On one hand, Claire is shutting down a personal and potentially offensive conversation. It might seem like a "sick burn," and Hannah certainly seems taken aback by it in the moment. However, I think House of Cards does a good job of putting their respective choices on an even playing field. Women who choose not to have children are just as valid as those who do. At least Hannah recognizes the question as nosy, am I right? I may be giving Hannah Conway the benefit of the doubt, but I honestly don't think she was judging Claire by asking initially. Plus, it's a bit dark, but Claire's question is valid as well and I like that the show was so bold as to say that out loud.

The show doesn't ask you to decide who's right, because neither of them are right or better. This wasn't the first time in the that the show has cut between Hannah and Claire's different lifestyles without placing one over the other. It's one of the high points of House of Cards Season 4, and I look forward to seeing more like this in Season 5.