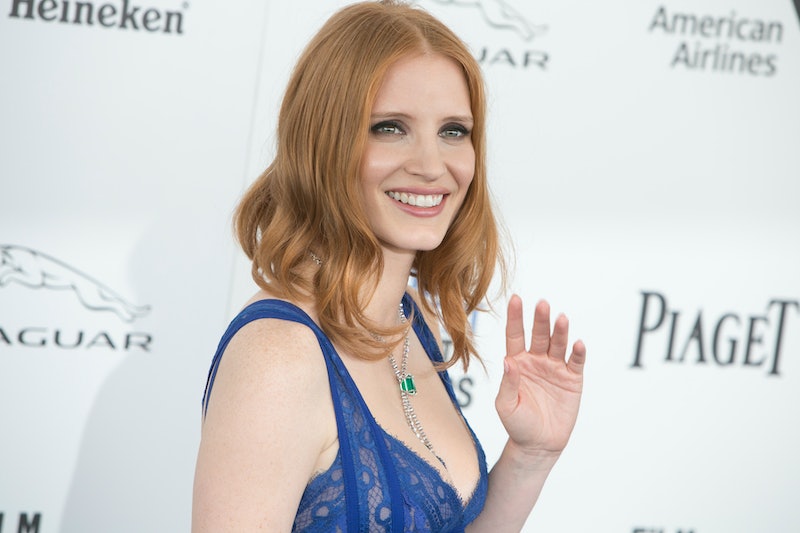 The media has always had a problem with pitting women in Hollywood against one another, but never has that been more evident than earlier this month, when Jessica Chastain had to publicly refute rumors of a feud with Jennifer Lawrence. In an interview with Haute Living , Chastain addressed the issue of her supposed battle with Lawrence, saying that any idea of the two two stars fighting was simply a myth. Yet unfortunately, it's far from the first time two major female actors have been put against each other, even if there's no proof to back up claims of a feud. And while the fact that women in the film industry have to defend themselves against accusations of so-called rivalries is certainly frustrating and evidence of Hollywood's underlying sexism, it's actually dangerous, too; these supposed "feuds" distract both the media and readers from thinking about the real, far more important issues these women face.

The fact that the media makes up these "feuds" to stir up drama is problematic enough; as Chastain said in Haute Living, "There has been a stigma out there that women don’t work well together. I’ve never seen women like this. I remember growing up hearing this myth, that women fight when they’re together and it’s completely inaccurate. I’ve never seen it." And even back in 2013, when she and Lawrence were first pitted against each other, the Zero Dark Thirty actor wrote a Facebook post that said, "Why do we support the myth that women are competitive and cannot get along?... please don’t allow the media to perpetuate the myth that women aren’t supportive of each other."

Yet that's only part of the problem. By focusing on the "drama" between female actors, the media often ignores some of the actual issues facing women in Hollywood that are truly worth talking about. Celebrity feuds, even fabricated ones, distract us from seeing the discriminatory ways women in the film industry are treated, and for the female actors at the center of it, they're forced to spend more energy discussing "fights" than on far more important subjects. The gender wage gap, the way some women in Hollywood are treated by male executives, the lack of women working behind-the-scenes; if you're spending all your time telling magazines that no, you're not fighting with your female co-star, are those issues going to come up?

Sometimes, yes, but I can't help but think that the amount is not nearly as high as it should be. It's unfair to these women; being forced to walk the tightrope of being a PR darling, staying "likable," or making sure you're in the right in some made-up fight, shouldn't be their priority. They should be getting to talk about the subjects that matter, not fictional drama. Of course, it's not just the film industry that has this problem; women in business, science, the arts, the military and even in motherhood are pitted against one another in a seemingly perpetual struggle. Some of it is by choice — the struggle for success can be demanding, and turn into feuds that begin out of fear of being passed by or ignored — but often, it's placed upon them without their consent.

It's a pretty crappy method of keeping women down, but thankfully, some, like Chastain and Lawrence, have seen through it. Chastian has done so by pointing out how awful these fabricated rumors can be, and by starting her own production company, set on helping other women succeed. Lawrence, as many know, penned a powerful essay about the wage inequality she has experienced in the past, and demanded that the issue be addressed. But most likely, more "feuds" will continue to be invented — and as long as they keep happening, these actors will have to continue to take time away from more important points to shoot down the rumors. Here's hoping that the next time news of a so-called feud among women in the entertainment industry pops up, we'll choose to ignore it and keep focusing on what matters.