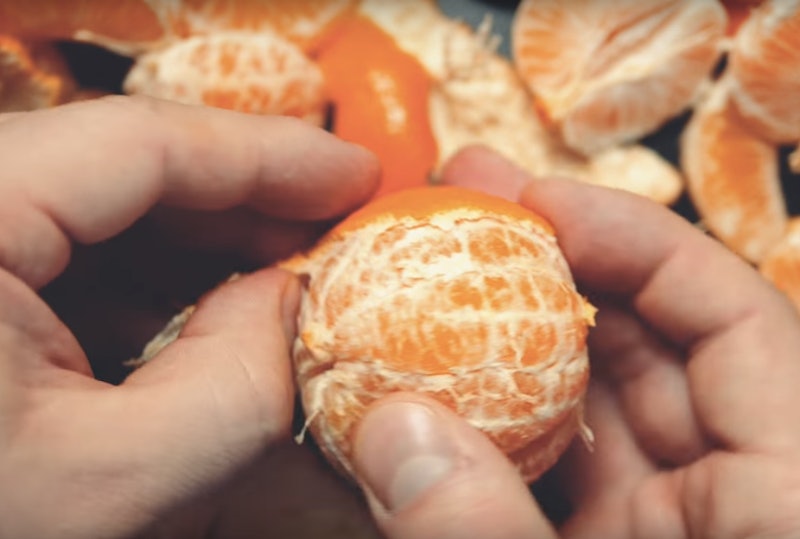 Anyone who struggles with chronic anxiety or stress will know there are few things you won't try to get a sense of relief during the day. But one thing you may not have heard of yet are reverse ASMR therapy YouTube videos. Essentially, there's a whole community building — and movement starting — around creating videos of people doing things while whispering, making soft, calming sounds like crinkles or taps, all while performing basic, day-to-day activities (think: chopping a vegetable, opening a package). The "reverse" part comes in when the video is played slowly and on rewind. You see the package being put back together, or the peeled tomato become whole again. For many people, it's therapeutic.

ASMR stands for "Autonomous Sensory Meridian Response," and it's a very difficult phenomenon to explain to those who don't experience it. Essentially, for the people who are affected by the sounds and sights, it's almost transcendent. Those who aren't wouldn't see the point at best, or find it annoying at worst.

As for the reverse videos? They're the product of Wryfield Lab, a YouTube channel that specializes in creating them. They were discovered by a Daily Dot write on a "useless YouTube binge," and after an interview, the anonymous founder revealed the following: "I don't even know exactly what the final result will be during the entire process of creation, whether it turns to be trippy, hallucinogenic, relaxing or all in one," he said. "And this is one of the reasons why I like making these weird videos."

While there is no actual data or research about ASMR — the term itself was coined in 2010 by a woman who started a Facebook group about the sensation — but many people swear by it. In a Washington Post article, Craig Richard, a professor and researcher at the Shenandoah University School of Pharmacy and founder of a blog called ASMR University said, “A lot is known about the physiological states associated with ASMR — relaxation, euphoria, comfort. It’s the same molecules involved when an infant is comforted by its mother. . . . It’s endorphins, it’s oxytocin, it’s serotonin.”

Whether you believe the hype or not, it may be something to give a try. Here, a few of the videos from the Wryfield channel:

Ink In The Water

More like this
9 Yoga Classes To Stream On YouTube For An Energy Boost
By Carolyn Steber
American Girl Doll Memes Are Going Viral On Instagram & Tiktok
By Emma Carey
What Is A “Softboy?” The TikTok Term & Aesthetic, Explained
By Courtney Young
Why Are TikTokers Slapping Each Other With Tortillas?
By Courtney Young
Get Even More From Bustle — Sign Up For The Newsletter