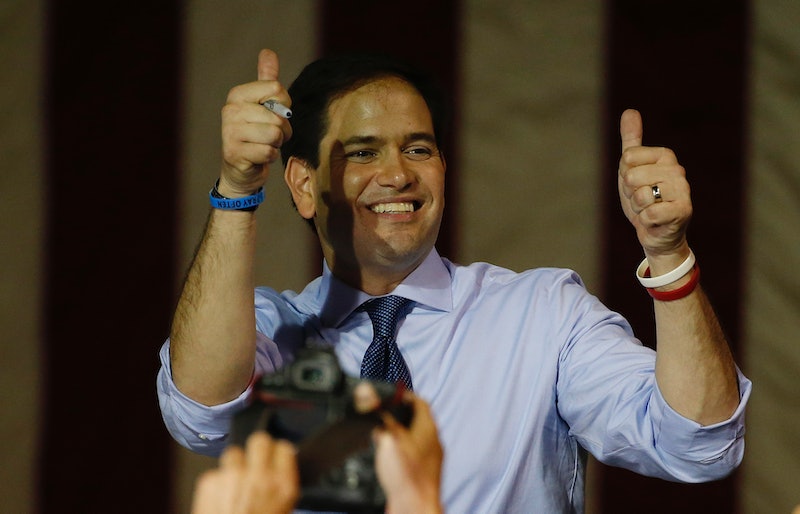 It's like he kept saying "Marco," but none of his Floridian friends would play along and yell "Polo" — or better yet, "Rubio" — back at him. On Tuesday, in the disaster of all campaign disasters so far this election, Florida Senator Marco Rubio lost Florida's Republican primary to real estate mogul and current Republican frontrunner Donald Trump. It was certainly not the news that Rubio wanted, but it was the news that Twitter ran wild with as the so-called "Mega Tuesday" results came in.

For weeks, Rubio's chances in Florida have been questioned, analyzed, and predicted. After showing some early momentum, Rubio hasn't managed to win many large and decisive states outright, and it would appear, at least to some, that his campaign has been losing ground to Trump and Texas Sen. Ted Cruz. Florida was widely considered Rubio's last stand — his Alamo, if you will. Unfortunately for him, his performance in the Sunshine state on Tuesday night played out a little too much like the actual Battle of the Alamo. A loss in many early states is one thing, but a loss in your own state? Particularly when your own state is Florida? That just seems unsurmountable, as these memes and tweets so politely point out.

Even if supporters still had hope for his path forward, Rubio himself signaled that Florida was his Alamo by suspending his campaign. He made the announcement during his concession speech shortly after Florida's results were announced — which really only fueled Twitter's fire more, let's be honest.