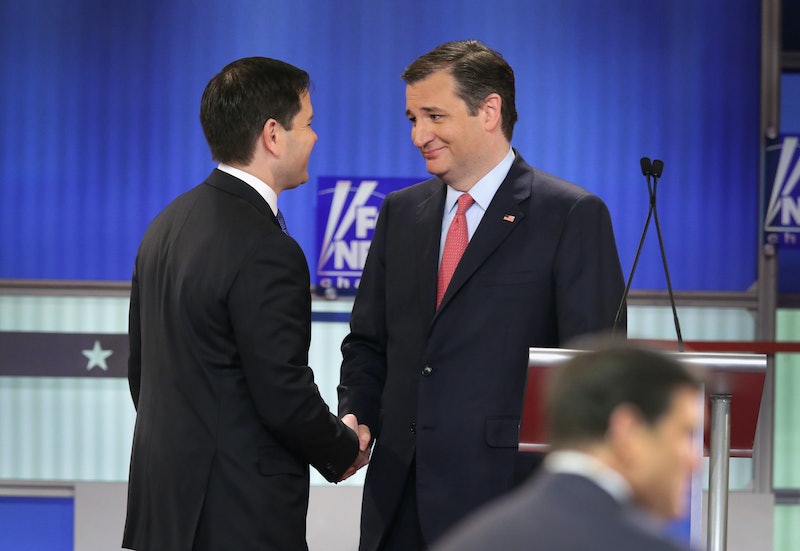 After a resounding loss in his home state on Tuesday, "Little Marco" Rubio officially suspended his campaign. A double-digit defeat to Donald Trump was too much for his flailing campaign to stand. Although all the votes haven't been tallied, it appears that Trump won Florida by nearly 20 points. But now that he has quit the circus-esque Republican race, will Rubio endorse Ted Cruz?

It's a scenario that few would have predicted a couple of months ago, when the two GOP candidates were at each other's throats. Rubio regularly took aim at Cruz for being a political flip-flopper. During the Fox News Republican debate in January (we know there have been a lot of them, but you may remember it as the one which Trump refused to grace with his presence), Rubio absolutely trashed Cruz for his views on immigration reform: "The truth is, Ted, throughout this campaign, you've been willing to say or do anything in order to get votes ... You helped design George W. Bush's immigration policy ... Now you want to trump Trump on immigration. But you can't. We're not gonna beat Hillary Clinton with someone who's willing to say or do anything to win an election." Ouch.

However, Rubio's campaign said Tuesday night that the Florida senator will join the “stop Trump movement" — and with Cruz being the closest Republican nipping at Trump's heels, this may mean that Rubio is preparing to endorse his former rival. It's certainly an endorsement that many Republicans are hoping to see as part of the desperate effort to block Trump from winning the nomination. Hopes — or at least predictions — that Rubio would throw his weight behind Cruz flooded Twitter:

Conservative pundit Erick Erickson seemed to be just short of pleading with Rubio's supporters to switch their support to Cruz, tweeting: "Tine [sic] for @BobbyJindal and other Rubio surrogates to move quickly to Cruz."

The biggest indicator that Rubio may be ready to — at least superficially — mend fences and endorse Cruz may come from the Texas senator himself. Cruz released a statement shortly after Rubio announced he was quitting the race, and he made it very clear that he was trying to curry Rubio's favor:

Marco Rubio is a friend and a colleague who ran an optimistic campaign focused on the future of our party, conservative principles, and uplifting the American people. The Republican primary was stronger because of the ideas he brought forth. Marco’s story embodies the promise of our great nation.

The question is: If Rubio shares the stage with his former competitor, how much water will he need?