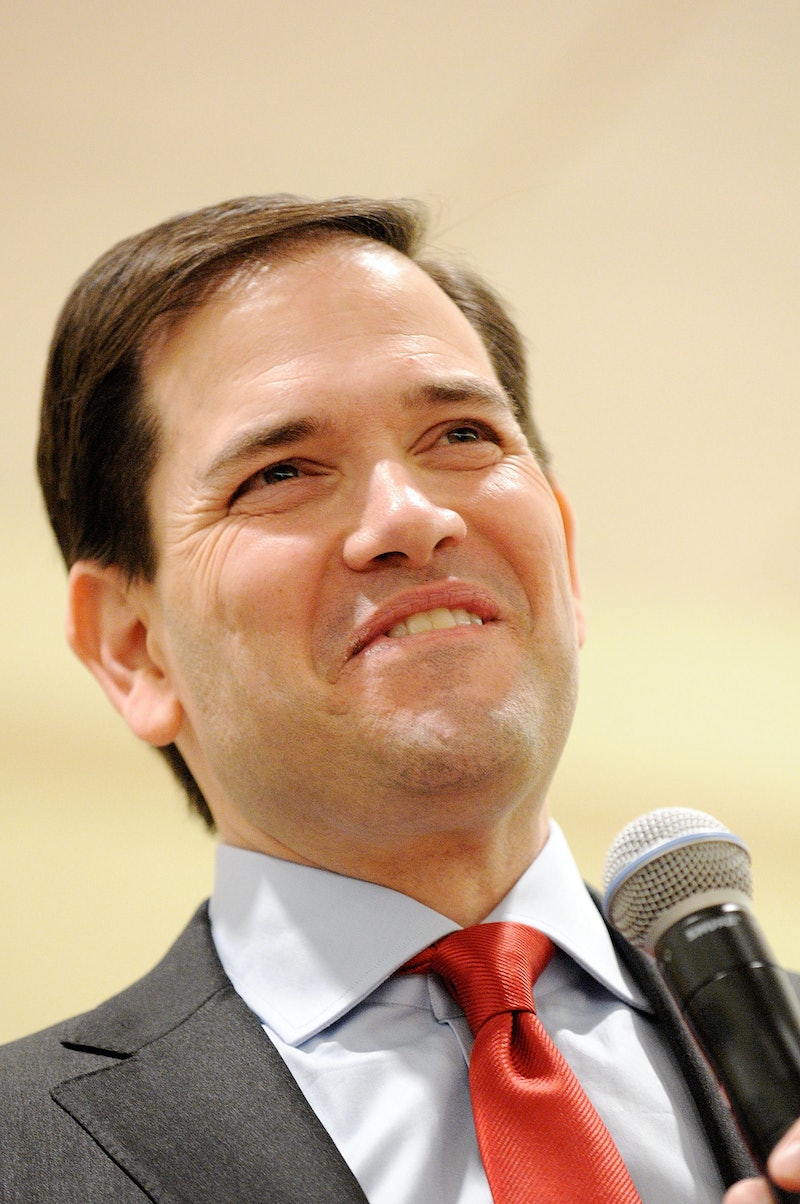 On Tuesday night, another one of the Republican presidential candidate finally dropped out of the race, just minutes after suffering a devastating defeat on his home turf. Marco Rubio tanked in the state of Florida, losing to GOP frontrunner Donald Trump by double digits, and then suspended his campaign in a concession speech. But just because the senator from the Sunshine State is out of the running doesn't mean there isn't still some intrigue surrounding his candidacy. Specifically, who will get Marco Rubio's delegates?

Well, here's your short answer: They don't belong to anyone anymore. When a candidate wins delegates through the primary process, those delegates are bound to them ― regardless of the individual political opinions or leanings of the people in question, they support the candidate they were awarded to.

But now, with the Rubio campaign suspended, all those delegates (163 at the time of this writing) are now free to support whomever they please come the Republican National Convention in July, meaning that the time is ripe for some backroom dealings and aggressive political machinations. And if you're looking for someone who could really benefit from this, look to Ohio governor John Kasich, who had the best night of his campaign at the exact same moment Rubio finally collapsed.

Needless to say, what happens to Rubio's modest trove of delegates could be huge, because Trump desperately wants to secure the nomination outright by nabbing at least 1,237 of them so that he doesn't have to face a contested convention. For a candidate like Kasich, that's really the only feasible way he can become the Republican nominee, and that's getting closer to being true for Ted Cruz, too.

Of course, that's not the only possible avenue for Kasich to go, especially if he rolls into the convention distantly in third place. Namely, he could try to trade on his delegate share to secure some kind of job in a Trump or Cruz administration ― he's previously said that he wouldn't want to be vice president, but he wouldn't be the first. Joe Biden used to be pretty down on the idea, too.

In any case, it'll be fascinating to see what happens next. With three men left in the field and the odds of no candidate winning a delegate majority increasing as time goes by, this much seems like a safe bet: Rubio's share is going to be pivotal, no matter who they ultimately go for.

More like this
Boris Johnson’s Leadership Is In Question – Again
By Bustle UK
How To Fight For Reproductive Rights, Based On How Much Time You Have
By Courtney Young
How 5 People Upended Their Lives To Fight For Abortion Rights
By Hannah Smothers
Juneteenth Is Now A Federal Holiday — Here's What That Means
By Lani Seelinger and Syeda Khaula Saad
Get Even More From Bustle — Sign Up For The Newsletter