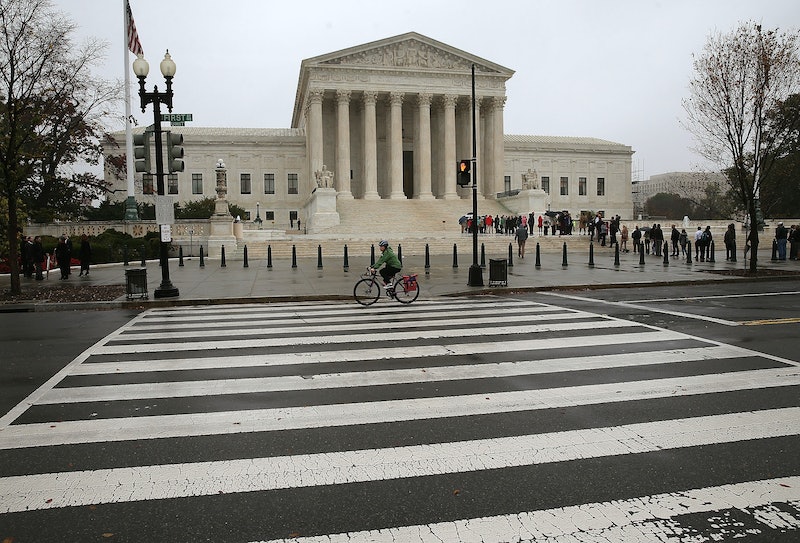 Being considered for an available seat on the Supreme Court is no small thing, particularly when the opening comes following the death of a high court justice who sat on the bench for three decades. Fortunately for chief judge of the U.S. Court of Appeals in Washington D.C., Merrick Garland, being put up for a nomination isn't unknown to him — he had been considered for both of President Obama's previous Supreme Court vacancies (filled by Sonia Sotomayor and Elena Kagan). Garland's significant other is no stranger to the intense process of moving up the court system ladder, either. So who is Lynn Garland, Merrick Garland's wife?

Lynn (formerly Lynn Rosenman) already had justices in the family before marrying her husband in 1987. Her grandfather, Samuel Irving Rosenman, served as a justice on the New York Supreme Court. (He also worked as special counsel to Presidents Franklin D. Roosevelt and Harry Truman, no big deal.) Her father Robert worked as a partner in the New York firm Cravath, Swaine & Moore, according to a New York Times marriage announcement.

Though Lynn was surrounded by legal experts, the New Yorker opted for an alternate career path, according to the Times announcement. In 1987, she worked in Falls Church, Virginia, as a staff assistant to the vice president of operations for defense electronics contractor E-Systems Inc.'s Melpar division, but not much about her career has been publicized since.

So though Lynn has various connections to the nation's legal system, she's not as into it as the potential SCOTUS nominee. Merrick has been all about the courts since he graduated from Harvard Law in 1977; he even clerked for SCOTUS Justice William J. Brennan, Jr. before marrying Lynn.

Having been in the game for quite awhile, the couple shouldn't be fazed by the latest push for Garland to reach the high court.

More like this
Police Shove 'Full House' Star Jodie Sweetin At An Abortion Rights Protest
By Radhika Menon
Where Is Oscar Torres In 'Only Murders In The Building' Season 2?
By El Hunt
The UK Abortion Laws In 2022, Explained
By Sophie McEvoy
Every Single Big & Small Way You Can Fight For Abortion Rights
By Tess Garcia
Get Even More From Bustle — Sign Up For The Newsletter