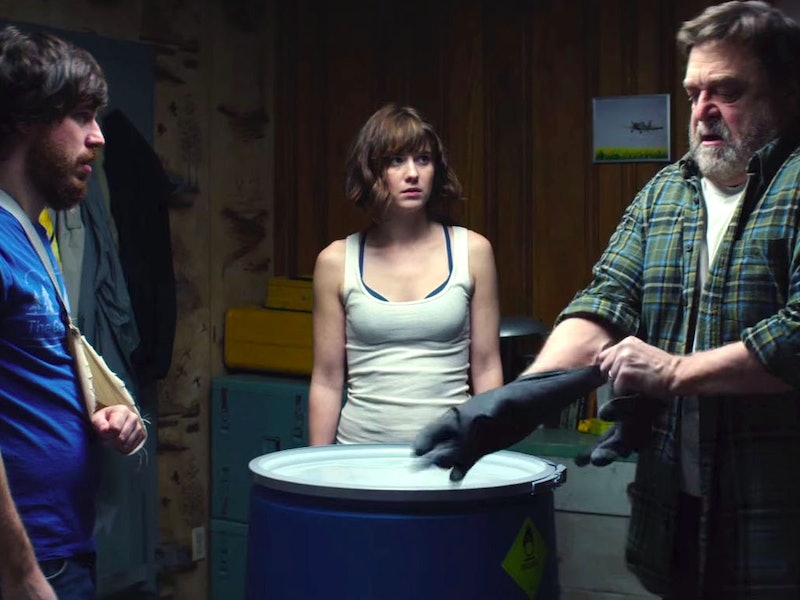 Haven’t seen these movies yet? Stop right here. There’s a hard spoiler alert in effect for the list below. I’m going to break down the major points of connection between the original Cloverfield and the movie that Abrams told Fandango is a “spiritual successor” to the first. Plot points will be spilled ahead, so please beware. Here are seven ways in which Cloverfield and 10 Cloverfield Lane are more alike than not.

The cast of the original Cloverfield film includes Deadpool's T.J. Miller and Masters Of Sex star Lizzy Caplan as a group of friends sending their buddy off to a new job adventure in Japan. The heroine of 10 Cloverfield Lane is Michelle (Mary Elizabeth Winstead), who could have easily fit in with that crowd...if they hadn't all been flattened by the giant sea monster.

Both Cloverfield movies save the straight-on creature shots for the final act of the film. And they certainly didn't give away the goods in any of the promotional images or videos.

It's not excessive, but it's there. These are monster movies. They're supposed to be fun.

Well, 10 Cloverfield Lane's Howard might be wary of using either of those words. But the fact is that the disasters in both movies require characters to band together in new ways. And, especially in the case of this new film, that tentative trust can lead to regret.

What, like humans were just going to lie down and take it? The first Cloverfield shows military action taking place to bring down the monster. 10 Cloverfield Lane just references it, but the last shot shows Michelle speeding towards a gathering point that she hears about on the radio.

Bad Robot loves theirs Easter Eggs. I was hugely invested in the marketing campaign for the first Cloverfield , which included Myspace profiles for the characters, press releases, and news reports that tie the activities of fictional Japanese mining company Tagruato to the growth of the monster. The 10 Cloverfield Lane promotional machine continued that process, linking Howard (John Goodman) to that company and suggesting that those monsters were perhaps the next biological phase of the Cloverfield species.

Will the saga continue in another Cloverfield movie? As far as I'm concerned, the invasion is far from over.

More like this
Here’s Everything Coming To & Leaving Netflix In February
By Jake Viswanath
Keke Palmer Shares The Sex Of Her & Darius Jackson's Baby
By Jake Viswanath
Austin Butler Confirms Vanessa Hudgens Pushed Him To Do 'Elvis'
By Alyssa Lapid
At 28, Rosie Perez Risked Her Career To Stop Playing Stereotypes
By Gabrielle Bondi
Get Even More From Bustle — Sign Up For The Newsletter
From hair trends to relationship advice, our daily newsletter has everything you need to sound like a person who’s on TikTok, even if you aren’t.