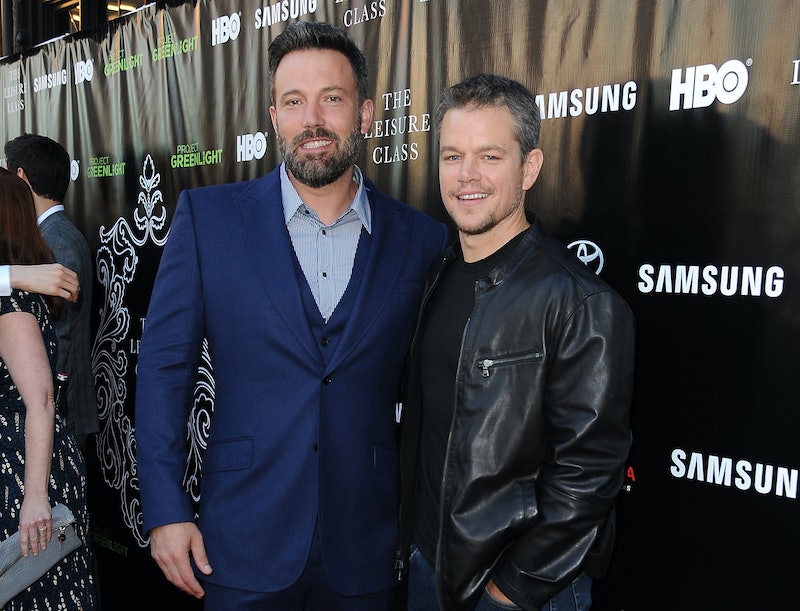 Ben Affleck and Matt Damon are back again, doing what they do best: Creating amazing projects together. This time, the two are working on a new show called The Runner for Verizon's Go90 platform. In case you're not familiar, the Go90 platform is a social entertainment app that allows for the streaming of on-demand videos, while also relying heavily on social media interaction. Which makes it the perfect place for this new show, which — according to Variety — is slightly reminiscent of the many action-oriented and spy films the two have put out over the years. In fact, I'm fairly sure that upon viewing, The Runner will remind you of a lot of Affleck and Damon movies from decades past.

The premise of the show is simple: One contestant will have to try and make it unnoticed across the US in 30 days. Sounds easy enough, right? Wrong. Because, in true Jason Bourne style — I mean, Damon and Affleck style — the rest of the country is invited to try and locate and capture this person. There will be real money prizes for those who provide tips, sightings, and evidence of the runner's location. If it works, this may be one of the coolest reality competition programs out there. However, it is hard to deny that it doesn't seem very close to some other Affleck and Damon projects over the years.

I'll just acknowledge the elephant in the room right now, because this show The Runner is basically a reality version of this movie. Don't get me wrong, I absolutely love the Bourne franchise, but it will be interesting to see it played out in real life.

It really doesn't get any better than the Ocean's franchise. It's all about old-school robberies, classic George Clooney, and a little bit of mystery thrown into each film.

In this film, Affleck plays Jennings, an engineer whose million-dollar idea leaves him on the run for his life. Sound familiar?

Ben Affleck and Morgan Freeman — enough said. This early '00s gem didn't quite get the recognition it deserved, but hopefully The Runner won't fall into the same trap.

This film is all about tracking down suspects and finding out "who did it" before the clock runs out of time.

In this film, Affleck's character struggles to find his missing wife and clear his name of all wrong doing. While there is no missing wife in The Runner, there is plenty of searching going on that is very reminiscient of the searching in this film.

This film with Emily Blunt and Damon is worth a watch. It's a crazy twisted love story that involves — you guessed it — someone being on the run.

The name itself makes it pretty obvious why this film is similar to their new project. It also starred Justin Timberlake, who I'm hoping would be able to make an appearance of The Runner, but that's doubtful.

At this point, it's becoming clear that both Affleck and Damon have built their careers off of espionage, mystery, and action, and who can blame them — they are so good at it. Hopefully we'll have more of their work for years to come.