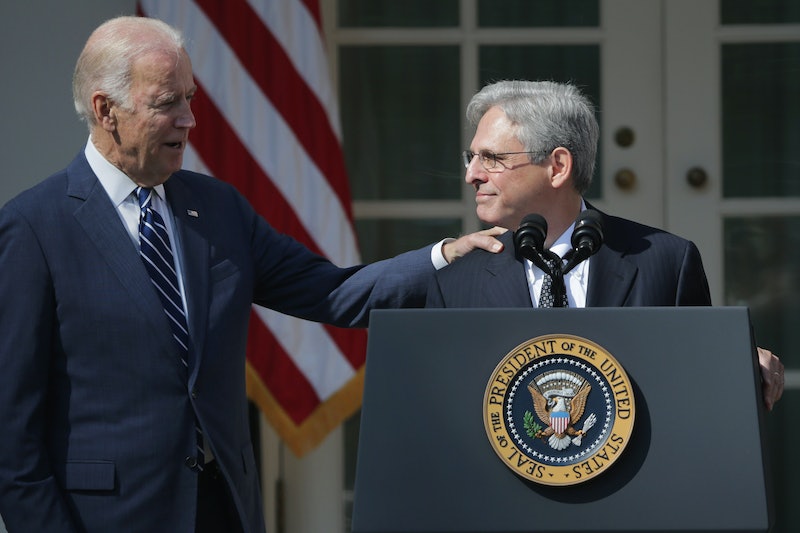 The "Do Nothing" Congress is promising to live up to its name when it comes to President Obama's Supreme Court nominee, Merrick Garland. It is the job of the Senate to hold confirmation hearings for the president's nominees. But, since Justice Antonin Scalia's unexpected death in February, many Senate Republicans have promised not to do so, under the guidance of Majority Leader Mitch McConnell. The Republicans have argued that Obama should leave the nomination of the next Supreme Court Justice up to the next president, though there is no law dictating that a president's responsibility to make such nominations runs out in his final year. The president has been very vocal about his disagreement with McConnell and other GOPers, and, on Wednesday, he was backed up by Vice President Joe Biden, who told the Senate to give Garland due process.

"When the President seeks the advice and consent of the Senate, it is their constitutional duty to do their jobs. Let's get this done," Biden tweeted. He wasn't only speaking as a frustrated Democrat, former senator, and vice president; he was speaking as the former chairman of the Senate Judiciary Committee, a role he filled for eight years.

In February, Biden began catching heat from Senate Republicans for a statement he made as Chairman of the Judiciary Committee in 1992, during what would be George H.W. Bush's final year as president. Biden said, "the Senate Judiciary Committee should seriously consider not scheduling confirmation hearings on the nomination until after the political campaign season is over." Biden made this statement in June, when the race for the next president was heating up.

According to Think Progress, the context of Biden's statement makes it consistent with his current opinion that the Senate should hold confirmation hearings for Garland in Obama's final year. Biden, in 1992, was speaking to what he saw as President Bush's lack of proper consultation with the Senate concerning his choice of nominees. He said during his speech, "If the president [George H.W. Bush] consults and cooperates with the Senate or moderates his selections absent consultation, then his nominees may enjoy my support as did Justices Kennedy and Souter."

Obama did consult Mitch McConnell and Chair of the Judiciary Committee Charles Grassley, asking them for names of nominees they would consider, according to the New York Times. But the senators held steadfast to their commitment not to consider any of the president's picks. Garland is a moderate judge and has a history of support from Republicans, NPR reports. This adds to the political pressure Biden, Obama, and other Democrats have placed on Senate Republicans to change their tune and hold confirmation hearings, which, as J-Bid pointed out, is their job.