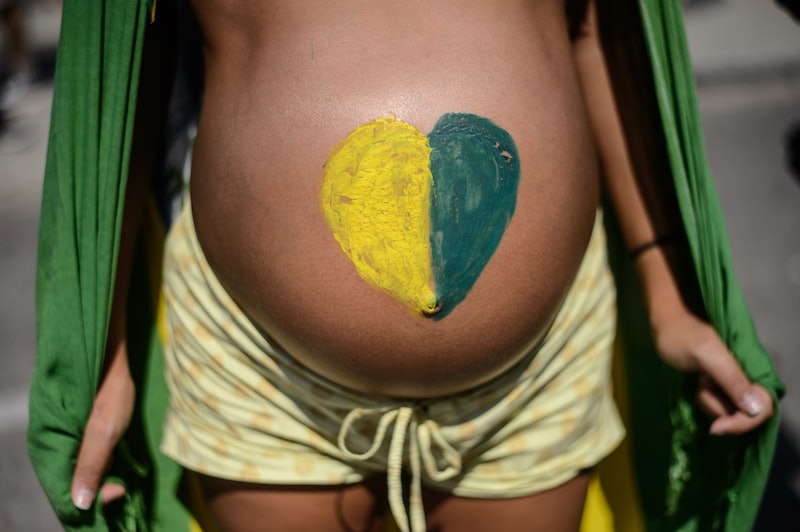 Since May 2015, Brazil has faced an outbreak of the Zika virus that primarily spreads from person to person through mosquitoes. There have been a reported 1.5 million Zika cases in Brazil as of February 2016, when it was declared an international public health issue, and the virus most often affects the poorest parts of the country in states in the northeast, notably Pernambuco, Bahia, and Paraiba. The virus is especially dangerous to pregnant women, as researchers have determined that there is a strong correlation between Zika in pregnant women and microcephaly, a condition that causes babies to be born with smaller heads and can often cause other developmental problems. The outbreak has incited alarm throughout the country, so here's how you can help Brazilian women fight the Zika virus.

The virus, which has no vaccine, is not new. It was first discovered in Uganda in 1947, and the first human case was discovered a few years later in 1952. Other outbreaks since then have been found in other parts of Africa, Southeast Asia, and the Pacific Islands. It wasn't until the outbreak in Brazil, however, that scientists saw an exponential rise in microcephaly rates, thus linking the virus to the condition. Some symptoms associated with the disorder include seizures, intellectual disabilities, hearing loss, and vision problems, among others.

That's right — abortion is also illegal in Brazil unless an individual is a victim of rape. In October 2015, a bill was approved that would limit access to emergency contraceptives (like Plan B, commonly known as the morning after pill) and information on abortion to rape victims only. According to Brazilian scholars, each year there are an estimated 850,000 abortions performed illegally in the country, and 150,000 women each year seek emergency medical attention for illegal abortion complications.

With a lack of access to reproductive health care, poor infrastructure, and little information on contraceptives accessible to the most affected women, this virus is provoking a sharp look at the war on reproductive rights in Brazil. Silvia Camurça, director of the feminist group SOS Corpo told the New York Times, "Pregnant women across Brazil are now in a panic. The fears over the Zika virus are giving us a rare opening to challenge the religious fundamentalists who put the lives of thousands of women at risk in Brazil each year to maintain laws belonging in the dark ages."

So, women have been encouraged to not get pregnant to avoid certain outcomes associated with the virus, but they do not have access to contraceptives to prevent pregnancy, and they are restricted from terminating their pregnancies. The discussion surrounding this virus is centered on the responsibility of women to not get pregnant, which is both reductive and takes away from the very real problem of access to reproductive rights and health. It also sheds light on the serious inequality facing the women who are most affected by the Zika virus in Brazil, that is both gendered and class-based.

Why are men not also central to the question of sexual and reproductive health? And if women are encouraged to avoid pregnancy, shouldn't there be more access to reproductive services to ensure that this is possible? Individuals who seek abortions — and who are desperate to access that right — will not be swayed away from terminating a pregnancy only because it is illegal. The only thing illegal abortion promotes is higher rates of unsafe, self-induced procedures.

One way to help women who are already pregnant with the Zika virus is to make a donation to Women on Web, an organization that is dedicated to making the abortion pill accessible to those who need it most and who are living in places where it is illegal. The activists behind the website have also specifically offered their services to women who have contracted the virus already.

You can also donate to UNICEF, which has recently gotten support from Google engineers and data scientists to build a digital platform that'll help plan for potential outbreaks.

But the easiest, and perhaps the most valuable form of help, is raising awareness and increasing knowledge about the virus. Zika has the potential of spreading into the United States, and everyone needs to be informed. To avoid getting infected, always use mosquito repellent and wear long-sleeved shirts and long pants to reduce your chances of bites. But should you get Zika, it's important you protect others: Practice safe sex whether that's using a condom or choosing to abstain for the time.